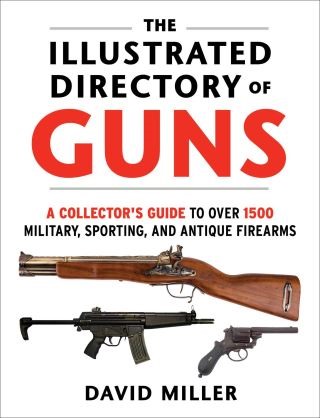 The Illustrated Directory of Guns

A Collector's Guide to Over 1500 Military, Sporting, and Antique Firearms

Written by a technical expert who has fired many of the guns featured, this book includes wide and varied assemblage of weapons from each of the world’s major manufacturing countries.

The Illustrated Directory series provide readers with a fully illustrated, comprehensive reference book packed with timelines, historical facts, and images designed to inform and excite. At 512 pages packed with information and photographs, this book is a necessary addition to any enthusiast's library.

Complete with full specification table with each entry including type, origin, caliber, and size, The Illustrated Directory of Guns is the most ambitious and lavishly illustrated history of guns for the collector and enthusiast. It shows in clear, detailed photographs and text over 1500 guns with separate sections on Pistols, Revolvers, Rifles, Shotguns (military and sporting), Machine Guns, and Submachine guns. A few featured include:

Organized A-Z by country and gunmaker's name, the book clearly shows the different types of gun which the world has used to hunt, wage war, break and defend its laws, hone its sharpshooting skills, and fire purely for the fun of it. The book also features an introduction on each section, which gives a brief history of the development of that particular kind of firearm.

David Miller: David Miller is a former senior officer in the British armed forces, who served in the Falklands, Germany, Malaysia, the Netherlands, and Singapore. Miller has subsequently worked as a freelance author and journalist for Jane’s Information Group. He has also worked for the authoritative International Defense Review and was the editor of Jane’s Major Warships. He has also written more than fifty other books relating to guns and warfare, including The History of Browning Firearms.