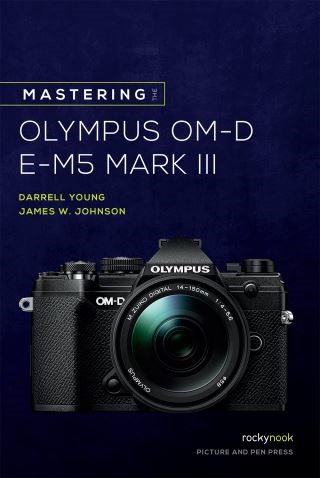 Olympus launched the OM-D E-M5 Mark III camera with a specific purpose in mind: to create a Micro Four Thirds camera for advanced enthusiast and professional photographers who prefer a smaller, yet very powerful mirrorless camera. The E-M5 Mark III is a true system camera for those who demand the best in cameras, lenses, and image quality.

Darrell Young and Jim Johnson’s Mastering the Olympus OM-D E-M5 Mark III explores the features and capabilities of the camera in a way that far surpasses the user's manual. It is designed to guide readers through the camera’s features with step-by-step setting adjustments; color illustrations; and detailed how, when, and why explanations for each option. Every button, dial, switch, lever, and menu configuration setting is explored in a user-friendly manner, with suggestions for setup according to various shooting styles.

The authors’ friendly and informative writing style allows readers to easily follow directions while feeling as if a friend dropped in to share his knowledge. The learning experience for new E-M5 III users goes beyond just the camera itself and covers basic photography technique.

Darrell Young: Darrell Young (aka Digital Darrell) is a full-time author and professional photographer in the East Tennessee, USA area. He is a member of Professional Photographers of America, the North American Nature Photography Association, and Nikon Professional Services--and adheres to the ethical guidelines of those fine organizations. Darrell has been photographing people, events, and places professionally for over 30 years, with a special interest in natural history. His mother gave him a Brownie Hawkeye camera in 1968 at the young age of 10 years and awakened a lifelong interest in capturing slices of time. Living in the foothills of the Appalachian Mountains--near Great Smoky Mountains and the Blue Ridge Parkway--has given him a real concern for the natural environment and a deep interest in nature photography. You'll often find Darrell standing behind a tripod in the beautiful mountains of Tennessee and North Carolina. Since about 2000 Darrell has been an active blogger and article writer on photographic subjects. In 2008 his first photography book was published and, since then, he has authored over a dozen books on the technical side of photography, with a special interest in helping new photographers fully understand their complex cameras so they can use them for more effective and enjoyable photography.|||When James (Jim) Johnson retired from a 25-year career as a software developer for IBM, he had already been working as a contract technical editor for Microsoft. After his retirement, technical editing and writing became his primary source of income to cover the cost of his “toys”—most of which were computer and photographic equipment. Jim’s involvement with cameras began in the mid ‘50s when he needed to record the interior of caves in Kentucky. At the time, the greatest challenge was to provide adequate illumination, so he purchased a Leica 3F camera (which was the norm at that time) and experimented with numerous lighting sources. He was later able to add a nice piece of brass-and-glass that had been manufactured by Canon during the post-war occupation. That 100mm telephoto was every bit as sharp and capable as the Leica lenses. Such began Jim’s appreciation for Japanese camera equipment. The ensuing years have seen numerous Nikon SLRs and DSLRs, Canon DSLRs, and now Olympus MILCs go through his hands, satisfying his on-going interest in the evolution of the technology and providing source material for several books, including this one. Jim and his wife Heather live on the California coast in a home that overlooks the Morro Bay estuary. The coast, bays, and mountains combine to host a vast array of botanical subjects, which are the focus of Jim’s current photographic interest.