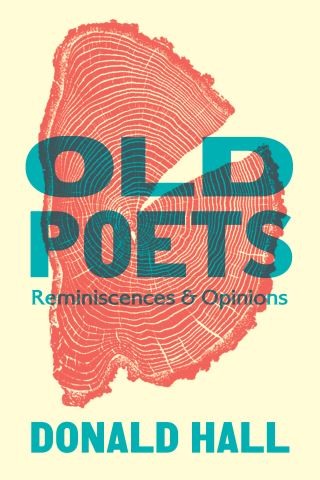 Intimate portraits of great poets in old age, giving new insight into their work and their lives, and context to the often flawless art created by flawed human beings. The best of themselves endure, and the old poets’ existence and endurance gives readers courage to pursue their own vision.

Donald Hall (Essays After Eighty and A Carnival of Losses: Notes Nearing Ninety) knew a great deal about work, about poetry, and about age. Each of those things come together in this unique collection. We hear about Robert Frost as Hall knew him: vain and cruel, a man possessed by guilt. But, as Hall writes, “The poet who survives is the poet to celebrate; the human being who confronts darkness and defeats it is the one to admire. For all his vanity, Robert Frost is admirable: He looked into his desert places, confronted his desire to enter the oblivion of the snowy woods, and drove on.”

Hall’s essays are once both intimate portraits and learned treatises. He takes us on a pub crawl through the Welsh countryside with the word-mad Dylan Thomas; to the Faber & Faber office of T. S. Eliot, who had discovered more happiness in age than in youth; to a reading where Robert Frost’s public persona hid the truth; to Brooklyn for lunch with the enigmatic Marianne Moore; and to Italy and for a visit with the notorious Ezra Pound. By the time Hall met them, each poet was, he observed, “old enough to have detached from ongoing poetry, to feel alien to the ambitions of the grandchildren.”

Also included are portraits of the poets who taught Hall as a writer: the unfailingly kind Archibald MacLeish and Yvor Winters, from whom he learned the most about poetry. Along the way are observations about many other poets and the literary cultures that sustained them.

For lovers of literature, this is a gorgeous remembrance and likely to compel an immediate visit to the poetry section of the nearest bookstore—as Hall writes, “Their presences have been emblems in my life, and I remember these poets as if I kept them carved in stone.”

Donald Hall (1928 – 2018) was revered as a preeminent man of American letters. Hall severed as U.S. Poet Laureate from 2006—2007, but was also considered among the greatest essayists of his time. In 2010, Hall was awarded the National Medal of Arts by President Barack Obama. Hall approached writing as he approached life–with simplicity, affection, and a wry wit.