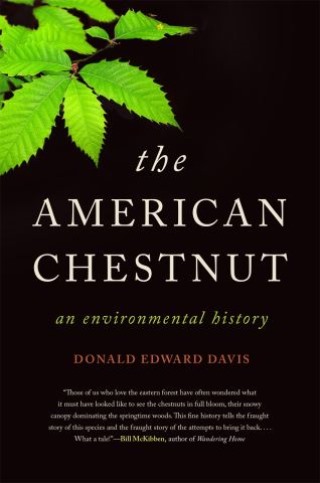 Before 1910 the American chestnut was one of the most common trees in the eastern United States. Although historical evidence suggests the natural distribution of the American chestnut extended across more than four hundred thousand square miles of territory—an area stretching from eastern Maine to southeast Louisiana—stands of the trees could also be found in parts of Wisconsin, Michigan, Washington State, and Oregon. An important natural resource, chestnut wood was preferred for woodworking, fencing, and building construction, as it was rot resistant and straight grained. The hearty and delicious nuts also fed wildlife, people, and livestock.

Ironically, the tree that most piqued the emotions of nineteenth- and early twentieth-century Americans has virtually disappeared from the eastern United States. After a blight fungus was introduced into the United States during the late nineteenth century, the American chestnut became functionally extinct. Although the virtual eradication of the species caused one of the greatest ecological catastrophes since the last ice age, considerable folklore about the American chestnut remains. Some of the tree’s history dates to the very founding of our country, making the story of the American chestnut an integral part of American cultural and environmental history.

The American Chestnut tells the story of the American chestnut from Native American prehistory through the Civil War and the Great Depression. Davis documents the tree’s impact on nineteenth-and early twentieth-century American life, including the decorative and culinary arts. While he pays much attention to the importation of chestnut blight and the tree’s decline as a dominant species, the author also evaluates efforts to restore the American chestnut to its former place in the eastern deciduous forest, including modern attempts to genetically modify the species.

DONALD EDWARD DAVIS is an independent scholar, author, and former Fulbright fellow. He has authored or edited seven books, including Southern United States: An Environmental History. His second book, Where There Are Mountains: An Environmental History of the Southern Appalachians, won the prestigious Philip D. Reed Environmental Writing Award. Davis was also the founding member of the Georgia Chapter of the American Chestnut Foundation, serving as its president from 2005 to 2006. He is currently employed by the Harvard Forest as a part-time research scholar and lives in Washington, D.C.