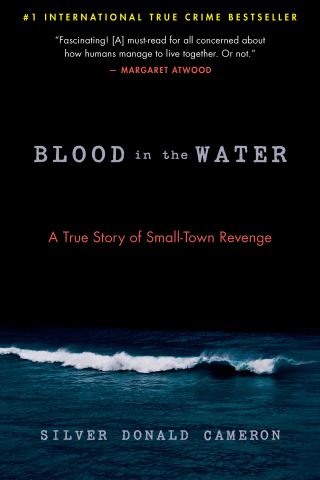 Blood in the Water

A True Story of Small-Town Revenge

“Fascinating! [A] must-read for all concerned about how humans manage to live together. Or not.” —Margaret Atwood

A masterfully told true story, perfect for fans of Say Nothing and Furious Hours: a brutal murder in a small Nova Scotia fishing community raises urgent questions of right and wrong, and even the very nature of good and evil.


In his riveting and meticulously reported final book, Silver Donald Cameron offers a stunning, intricate narrative about a notorious killing and its devastating repercussions.

Cameron’s searing, utterly gripping story about one small community raises a disturbing question: Are there times when taking the law into your own hands is not only understandable but the responsible thing to do?

In June 2013, three upstanding citizens of a small town on Cape Breton Island murdered their neighbor, Phillip Boudreau, at sea.

While out checking their lobster traps, two Landry cousins and skipper Dwayne Samson saw Boudreau in his boat, the Midnight Slider, about to vandalize their lobster traps. Like so many times before, the small-time criminal was about to cost them thousands of dollars out of their seasonal livelihood.

Boudreau seemed invincible, a miscreant who would plague the village forever. Meanwhile the police and local officials were frustrated, cowed, and hobbled by shrinking budgets.

One of the men took out a rifle and fired four shots at Boudreau and his boat.

Was the Boudreau killing cold blooded murder, a direct reaction to credible threats, or the tragic result of local officials failing to protect the community? As many local people have said, if those fellows hadn't killed him, someone else would have...