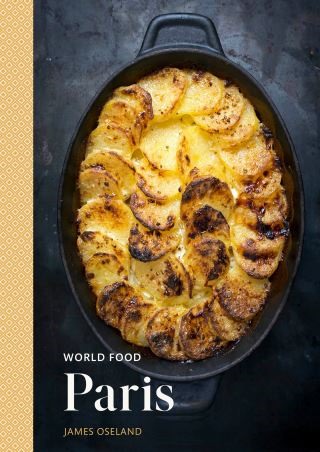 “This book embodies the culinary soul of Paris. It describes the incredible diversity of France’s capital’s food scene and markets and provides quintessential French recipes, as well as stories from passionate home cooks and bistros alike. Accompanied by superb photos of the city, dishes, and ingredients, from cheeses to wines to bread, World Food: Paris is useful and fun to read and cook from.”—Jacques Pépin

A definitive user’s guide that unlocks the secrets to real Parisian cooking, while the beautiful photography tells the tale of the world’s most dazzling food city.

Seasoned cooks and beginners alike will be inspired by this authoritative and delightful book, a new classic for everyone who loves Paris. With more than fifty accessible recipes and contributions from the city’s leading home cooks and chefs, World Food: Paris—part of the World Food series from award-winning author and food expert James Oseland—intimately captures the Parisian way with food as never before.

Included are recipes for time-honored dishes such as Burgundy-style beef braised in red wine and bacon, as well as new ones like roast pork seasoned with preserved lemon and ginger. Readers will also find fundamentals such as how to grill a bistro-style steak to perfection along with tips for recreating a classic Parisian apéro, or appetizer party, complete with wine, cheese, and small plates. There are also desserts such as crème brûlée and Grand Marnier soufflé, a dish as luscious as it is makeable.

Paris has long been synonymous with the best  in dining. But until now no single book has explained why it continues to matter so much to cooks and food lovers. With more than one hundred fifty photographs, information about ingredients and history, and a comprehensive glossary, World Food: Paris captures a vital modern city where cooks from all walks of life are continuing a glorious culinary tradition.

James Oseland: James Oseland travels extensively in search of the world’s best restaurants, street food stalls, markets, and home cooks. He has been writing about international cultures and their cuisines for decades and was editor in chief of Saveur for eight years, where his work garnered many accolades, including from the James Beard Foundation, the International Association of Culinary Professionals, and the American Society of Magazine Editors. His cookbook Cradle of Flavor was named one of the best books of the year by the New York Times and Good Morning America. He was also a judge for five years on Bravo’s Top Chef Masters.