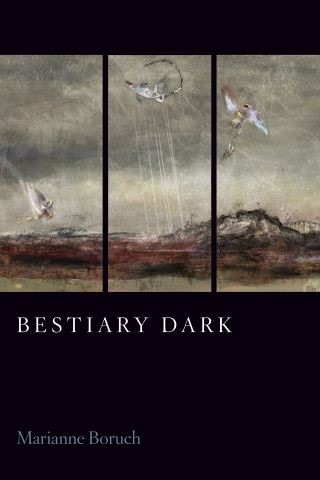 Is the world finite? Through place and time and the great expanse of Australia, Marianne Boruch ponders this, aided not just by wallabies and platypus, kangaroos and wombats, but by a cheeky Archangel who wanders in and out of her poems. The pertinent wisdom of an Indigenous Elder is here too, along with the continuing presence of Pliny the Elder, the Roman naturalist and historian who in 77 CE posed the question Boruch considers. Written following Boruch’s Fulbright in Australia, and on the heels of the devastating fires that began after her departure, Bestiary Darkis filled with strange and sweet details, beauty, and impending doom—the drought, fires, and floods that have grown unspeakable in scale. These poems face the ancient, unsettling relationship of humans and the natural world—the looming effect we’ve wrought on wildlife—and what solace and repair our learning even a little might mean.

Marianne Boruch: Marianne Boruch is the author of The Book of Hours (Copper Canyon Press, 2011), which received the Kingsley Tufts Poetry Award, among other works. She developed and directed the MFA program in creative writing at Purdue University, where she has taught since 1987. She lives in Indiana.