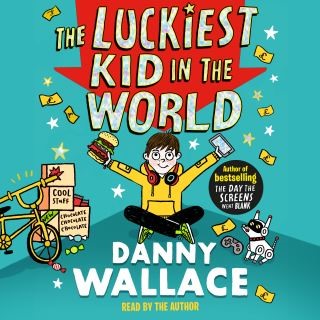 The Luckiest Kid in the World

What if you suddenly had everything you’d ever dreamed of? That’s exactly what happens to 10-year-old Joe Smith in this brand-new comedy adventure from bestselling author, comedian and presenter Danny Wallace – hilariously read aloud by Danny himself.
Perfect for children age 8+ and fans of David Baddiel, Stephen Mangan, David Walliams, Andy Griffiths, Jenny Pearson and Helen Rutter.

Joe Smith is average in every way. He is average height. He lives in an average town, on an average street, in an average house, with a very average family. But when a survey identifies him as the most average kid in the country – well that makes him very special indeed. Suddenly, everyone wants Joe to test out their latest products. Overnight he is sent mountains of gifts ­– the best trainers, the coolest bike, the most exciting new tech, the latest flavours of ice cream – and so much more. He gets special cinema screenings and the entire water park all to himself. Joe now has everything he could possibly want in the world – and that’s far from average.

But is going from zero to hero all it’s cracked up to be?

This brilliantly warm-hearted, laugh-out-loud family adventure will leave you thinking about friendship, family and why everyone is special just the way they are.

Danny Wallace:
Danny Wallace is an award-winning writer who’s done lots of silly things. He’s been a quiz show host. A character in a video game. He’s made TV shows about monkeys, robots, and starting his own country. He has written lots of books for grown ups, in which he uses words like ‘invidious’, and he pretends he knows what they mean but he doesn’t. He thinks you’re terrific. Danny’s first book for children, Hamish and the Worldstoppers, was the first in a bestselling series, and his recent standalone, The Day the Screens Went Blank is highly acclaimed. The Luckiest Kid in the World is his latest novel for readers age 8+.