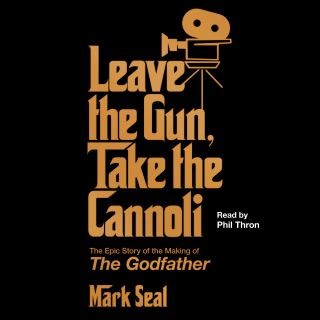 Leave the Gun, Take the Cannoli

The Epic Story of the Making of The Godfather

The behind-the-scenes story of the making of The Godfather, fifty years after the classic film’s original release.

The story of how The Godfather was made is as dramatic, operatic, and entertaining as the film itself. Over the years, many versions of various aspects of the movie’s fiery creation have been told—sometimes conflicting, but always compelling. Mark Seal sifts through the evidence, has extensive new conversations with director Francis Ford Coppola and several heretofore silent sources, and complements them with colorful interviews with key players including actors Al Pacino, James Caan, Talia Shire, and others for irresistible insights into how the movie whose success some initially doubted roared to glory.

On top of the usual complications of filmmaking, the creators of The Godfather had to contend with the real-life members of its subject matter: the Mob. During production of the movie, location permits were inexplicably revoked, author Mario Puzo got into a public brawl with an irate Frank Sinatra, producer Al Ruddy’s car was found riddled with bullets, men with “connections” vied to be in the cast, and some were given film roles.

As Seal notes, this is the tale of “a classic movie that revolutionized filmmaking, saved Paramount Pictures, minted a new generation of movie stars, made its struggling author Mario Puzo rich and famous, and sparked a war between two of the mightiest powers in America: the sharks of Hollywood and the highest echelons of the Mob.” ​

Leave the Gun, Take the Cannoli is the lively and complete story of how a masterpiece was made, perfect for anyone who loves the movies.

Mark Seal: Mark Seal joined Vanity Fair as a contributing editor in 2003, covering stories as varied as the Bernie Madoff scandal, Ghislaine Maxwell, Tiger Woods, the fall of Olympian Oscar Pistorius, the making of classic films such as Pulp Fiction, and many more. His 2016 Vanity Fair article “The Over the Hill Gang,” about a gang of retired thieves who pulled off the biggest jewel heist in British history, was the basis of the 2018 film, King of Thieves, starring Michael Caine. In addition to Leave the Gun, Take the Cannoli. he is the author of the books Wildflower and The Man in the Rockefeller Suit. His website is Mark-Seal.com.