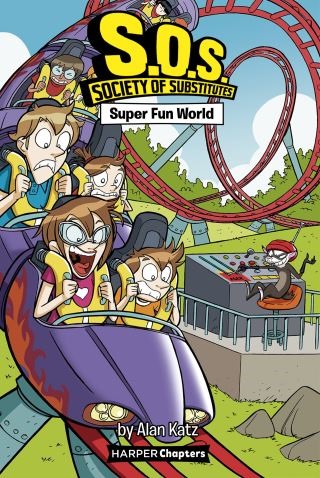 If there’s a problem in school, there’s no substitute for the world-saving substitute teachers of the S.O.S.! This is the fourth book of this hilarious, highly illustrated early chapter book series.

It’s Spring Break! Milton Worthy and his family are off on a vacation to Super Fun World. It’s a week filled with roller coasters, rides, and fried food—and no super-sub missions for seven whole days.

Everything is going according to plan until Milton gets stuck looking after Noah—part-time classroom pet, full-time evil mastermind—who has an entirely different kind of getaway in mind.

Will Milton be able to figure out Noah’s latest plot for world domination before it ruins his family’s fun time?

HarperChapters build confident readers one chapter at a time! With short, fast-paced books, art on every page, and milestone markers at the end of every chapter, they're the perfect next step for fans of I Can Read!

Alan Katz has written more than 40 highly acclaimed children’s books, including Take Me Out of the Bathtub and Other Silly Dilly Songs, The Day the Mustache Took Over, OOPS!, Really Stupid Stories for Really Smart Kids, and the New York Times bestseller Misty the Cloud, with Dylan Dreyer. Alan has received many state awards for children’s literature, and he frequently visits schools across the country.