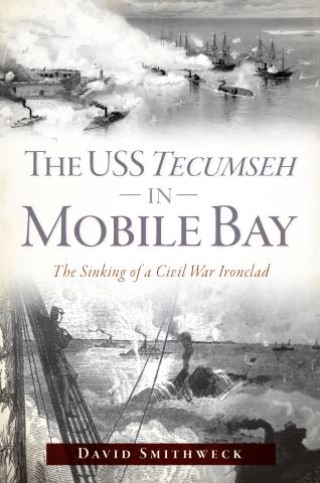 The USS Tecumseh in Mobile Bay

The Sinking of a Civil War Ironclad

In April 1861, Lincoln declared a blockade on Southern ports. It was only a matter of time before the Union navy would pay a visit to the bustling Confederate harbor in Mobile Bay. Engineers built elaborate obstructions and batteries, and three rows of torpedoes were laid from Fort Morgan to Fort Gaines. Then, in August 1864, the inevitable came. A navy fleet of fourteen wooden ships lashed two by two and four iron monitors entered the lower bay, with the USS Tecumseh in the lead. A torpedo, poised to strike for two years, found the Tecumseh and sank it in minutes, taking ninety-three crewmen with it. Join author David Smithweck on an exploration of the ironclad that still lies upside down at the bottom of Mobile Bay.

David Smithweck: David Smithweck is a graduate of Spring Hill College in Mobile, Alabama, and a Civil War historian. For more than fifty years, he has participated in projects such as the search and identification of two Confederate ironclad gunboats (CSS Huntsville and CSS Tuscaloosa) in the Mobile River, the investigation and mapping of Fort Powell in Mississippi Sound and investigations of the Civil War works at Oven Bluff and Choctaw Bluff on the Alabama and Tombigbee Rivers and the Confederate obstructions in the upper Mobile Bay. He served four three-year terms on the board of directors of the Mobile History Museum and the board of directors of the Alabama Lighthouse Association and was the founder of the Alabama Gulf Coast Archaeological Society Inc. in 1977.