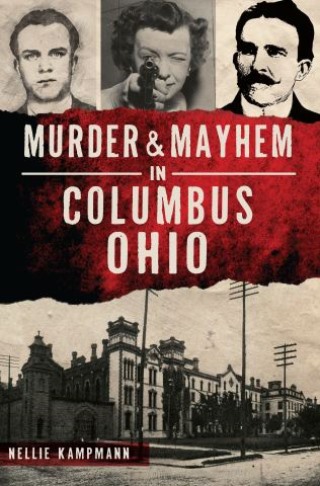 Every city's history has its dark underbelly of crime. Columbus is no exception. From the turn of the century to the dawn of World War I, scandals involving an opium den and a sadistic murderer rocked a respectable downtown community. Around the same time, a cop killer masterminded a plot to free himself from the Franklin County Jail by having his gang attempt to blow the place up with nitroglycerin. In 1946, dead bodies kept popping up after a prim young teacher disappeared from a quiet Grandview Heights neighborhood. Two years later, a middle-aged housewife was killed with a butcher knife the same day that a tattooed mystery woman was found knifed to death in a downtown hotel. Join Nellie Kampmann as she explores the back alleys of Arch City history.

Nellie Kampmann: Lifelong Franklin County resident Nellie Kampmann works professionally in the field of history. Her love of the subject has led her to volunteer with several Columbus history and historical preservation organizations, and she was a guest historian on The Dead Files. At her day job, her specialty is dealing with death records. While her co-workers have nicknamed her the "Mistress of Death," she is more of an aging hippie with a gardening addiction. Her previous book, A Haunted History of Columbus, Ohio, reflects her interest in all things spooky.