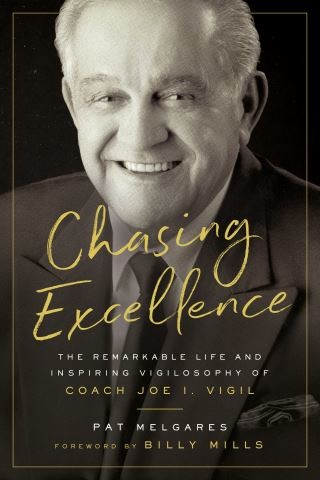 The Remarkable Life and Inspiring Vigilosophy of Coach Joe I. Vigil

Dr. Joe I. Vigil—known simply as "Coach" to virtually everybody he has ever met—rose from poverty to become a towering figure in the running world. Coach has won 19 national championships and coached 425 All-Americans, 22 Olympians...and an army of "Vigilantes" who seek to emulate his unique blend of compassion, competitive spirit, and commitment to others. In this long-overdue biography about America's preeminent distance-running coach, author and Vigilante Pat Melgares shares Coach Vigil's tale not just through the consummate storyteller's own words but also through those of more than 50 family members, friends, former runners, and foes who have been shaped by his presence over a lifetime. Coach Vigil is driven by a persistent desire to learn, a deep faith in people, and an unwavering loyalty to his hometown of Alamosa, Colorado. His life is an American dream—a must-read for anyone who loves an underdog or seeks to understand the timeless qualities that forge a leader. Chasing Excellence has been Coach Vigil's mantra for decades, for himself and those he teaches. At age 90, he's as relentless as ever in that quest.

Pat Joseph Melgares: Billy Mills was the 1964 Olympic gold medalist in the 10,000m with one of the most stunning underdog performances in track and field history. An Oglala Sioux member and US Marine, Mills is co-founder of the nonprofit Running Strong for American Indian Youth and a well-known speaker and activist on Native American issues. Born in Alamosa, Colorado, Pat Melgares was raised on the south side of town just three blocks from where Joe Vigil grew up. Pat graduated from Alamosa High and Adams State College, and was a four-time All-American from 1985-1989. Pat was also on four NAIA cross country championship teams and two The Athletics Congress (TAC) junior cross country championship teams. Pat studied journalism and began his career at the hometown Valley Courier. He became public information officer at Adams State and is now a communications specialist and public information officer at Kansas State University.