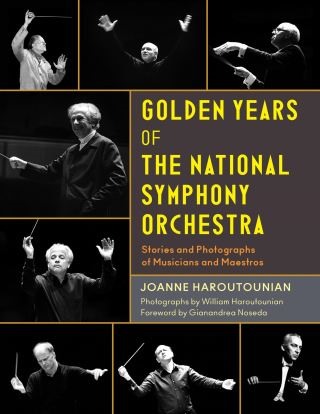 Stories and Photographs of Musicians and Maestros

Golden Years of the National Symphony Orchestra: Stories and Photographs of Musicians and Maestros presents a rich and intimate perspective of the orchestra as it evolved in prominence and international expanse throughout the past nine decades. Through hundreds of stunning photographs captured by NSO violinist William Haroutounian, the tenure of seven NSO conductors, major guest artists, and NSO members are brought to life, giving a rare and exciting glimpse of musical life on stage, backstage, and on tour.

Alongside these photographs are experiences from the members themselves, pieced together by Joanne Haroutounian. Humorous stories of mishaps during rehearsals and performances balance with some of the most historically significant moments in classical music history—from Mstislav Rostropovich’s return to Russia with the NSO and sheer excitement of the mobs to the sudden death of Gina Bachauer minutes before she was scheduled to perform in Athens. The book memorializes this rich and varied history and will enhance an appreciation for concert life.

Joanne Haroutounian served on the music faculty of George Mason University for over thirty years. She is the founder and executive director of the MusicLink Foundation, a national organization that provides music instruction to promising students in need.

William Haroutounian, violinist, is the longest serving member of the National Symphony Orchestra, having joined the orchestra in 1963 during Howard Mitchell’s tenure. During his 54 years of service, he has captured thousands of images in rehearsal settings from the unique vantage point of a musician in the orchestra.