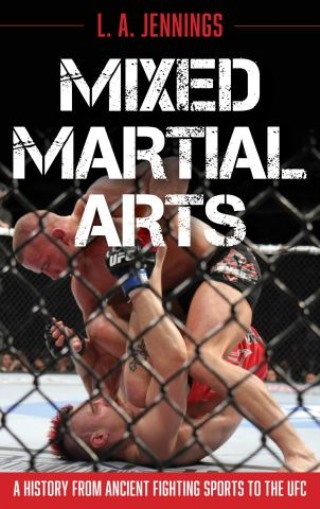 A History from Ancient Fighting Sports to the UFC

Mixed Martial Arts (MMA) is an international phenomenon, with a fascinatingly diverse and complex history that stems from fighting sports around the world.

In Mixed Martial Arts: A History from Ancient Fighting Sports to the UFC, L.A. Jennings explores the vast global history of martial arts—including Asian martial arts, African fighting sports, European pugilism and wrestling, and the fighting styles of North, Central, and South Americas—and how they gave rise to the modern sport of MMA. Jennings shares some of the most famous moments in fighting history alongside stories of the fighters themselves, such as the infamous 1976 fight between Muhammad Ali and Antonio Inoki.

When the Ultimate Fighting Championship premiered in 1993, it introduced the world to the controversial “cage fighting” at a scale never seen before. With the assistance of technological innovations and globalization, MMA has become the fastest growing sport on earth, the culmination of thousands of years of fighting for sport. Featuring fascinating stories and photographs of fighters from around the world, Mixed Martial Arts reveals the long and captivating history of this often-misunderstood sport.

L.A. Jennings is the owner of Train.Fight.Win., a Mixed Martial Arts gym in Denver, Colorado, where she teaches kickboxing, submission wrestling, and MMA. She is a regular contributor to VICE on fighting sports history and has been interviewed by NPR, The Economist, Cosmopolitan, and the HISTORY channel as an expert on the history and culture of MMA. Jennings teaches in the Media and Communications department at Metropolitan State University in Denver, Colorado.