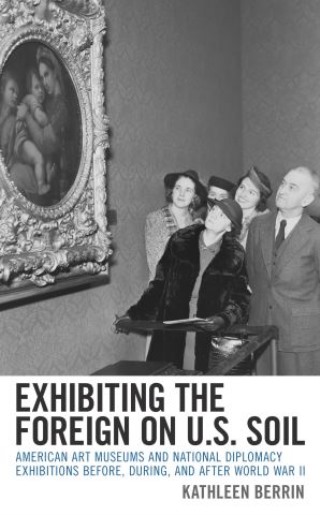 Exhibiting the Foreign on U.S. Soil

American Art Museums and National Diplomacy Exhibitions before, during, and after World War II

The uneasy relationship between the arts, US art museums, and the federal government has not been thoroughly explored by scholars. This book focuses on the development of “national diplomacy exhibitions” during World War II and the early Cold War and explains how the War provided the government with an impetus to create a national arts policy. It discusses how national diplomacy exhibitions on US soil were deployed as persuasive tools to influence public opinion, to reconcile discrepancies between high art and democracy, and to resolve America’s lagging art status and difficulties with “the foreign.” The type of soft diplomacy that art museums provide by initiating national diplomacy exhibitions has not received emphasis in the scholarly community and art museums have essentially been ignored in cultural studies of the early Cold War.

Scholarly analysis of museum exhibitions in the last quarter of the 20th century is now a popular topic, but investigations of exhibitions between 1939-1960 have been thin. By scrutinizing major exhibitions during those formative years this book takes a new perspective and examines the foundational development of the so-called “blockbuster” exhibition stimulated by World War II.

Kathleen Berrin spent forty years as curator of Africa, Oceania, and the Americas at the Fine Arts Museums of San Francisco. During that time she developed national diplomacy exhibitions with Mexico, Peru, New Zealand, and Australia and curated over forty non-Western art exhibitions in which she has collaborated with major museums including the National Gallery of Art, Washington D.C. In 1986 she received a metal from the Instituto Nacional de Antropologia y Historia of the Government of Mexico for the return of Teotihuacan murals as well as the Peruvian Order of Merit for Outstanding Achievement in the Arts in 1988. She received a PhD in history at the University of California, Irvine, and is now a curator emeritus, an educator, and a cultural historian.