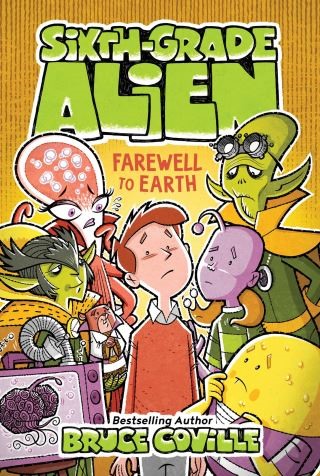 Pleskit gets abducted in this twelfth and final book in the hilarious, fast-paced, and accessible sci-fi series Sixth-Grade Alien from the bestselling author of Aliens Ate My Homework, Bruce Coville.

All things must come to an end—even sixth grade. But not all things end happily, and it looks as if Pleskit Meenom’s year as a sixth-grade alien is about to end in catastrophe as Earth is swept by rumors of alien abductions. Soon anti-alien demonstrations erupt outside Pleskit’s school.

Who is behind the rumors? Is there really a secret enemy on the embassy staff? What happens if the mission fails?

When Pleskit disappears, those questions take on new urgency. Desperate to answer them, Pleskit’s friends Tim and Rafaella are forced to team up with Tim’s old enemy, Jordan Lynch, to save the mission...and Earth!

Bruce Coville: Bruce Coville has published more than one hundred books, which have sold more than sixteen million copies. Among his most popular titles are My Teacher Is an Alien, Into the Land of the Unicorns, and The Monster’s Ring. Bruce also founded Full Cast Audio, a company that creates recordings of the best in children’s and young adult literature. He lives in Syracuse, New York, with his wife, Katherine. Visit him at BruceCoville.com.