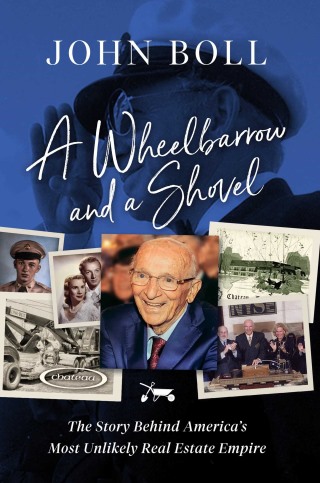 A Wheelbarrow and a Shovel

The Story Behind America's Most Unlikely Real Estate Empire

A Wheelbarrow and a Shovel documents the rags-to-riches success story of John Boll who built a real estate empire by developing manufactured home communities around the world then selling his company to the State of Washington Pension Fund for $2.3 billion.

A Wheelbarrow and a Shovel documents the truly remarkable story of one of America’s most unlikely business success stories. Starting with only a wheelbarrow and a shovel, as well as the same American dream that led his parents to leave their native Holland for the United States, John Boll built a real estate empire in the most unlikely of ways—by developing and improving manufactured home communities around the country. It’s a rags-to-riches tale that could only happen in America—and only with the hand of God leading the way.

Before Boll sold his company to the State of Washington Pension Fund for $2.3 billion, he was the first person to take a collection of mobile home communities to Wall Street.

John Boll: Following his service in the U.S. Army, John Boll founded Lakeview Construction Company, an underground contracting firm. In 1964, he launched Chateau Estates, a developer of manufactured home communities that created home sites for more than 20,000 families throughout Michigan and Florida.

In 1993, Chateau Estates went public and became Chateau Properties, Inc., a Real Estate Investment Trust (R.E.I.T), listed on the New York Stock Exchange. After his company merged and was sold to the State of Washington Pension Fund in 2003, it consisted of 240 communities in thirty-six states with more than 100,000 residential home sites. Boll and his wife of sixty-seven years, Marlene, spend time between their residences in Key Largo, Florida, and Grosse Pointe Shores, Michigan.

Through the John A. and Marlene L. Boll Foundation, they have provided more than $55 million to Christ-focused organizations, the arts, and educational and community development groups around the world.