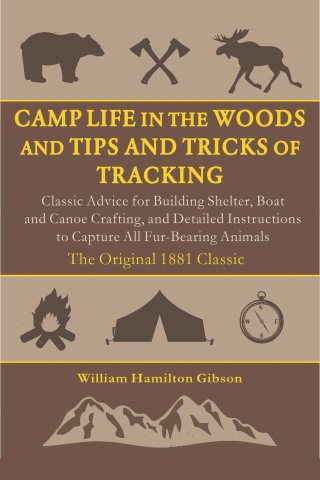 How to Build a Shelter, Start a Fire, Set Traps, Capture Animals, and More

A Classic Comprehensive Guide for Hunting and Trapping Animals

Whether or not a hunting expedition is in the plans this year, W. Hamilton Gibson’s guide to camping and trapping will give you a lesson in self-sufficiency and living simply. Building camp shelters and log huts, woodland bedding, and birch canoes are just some of the skills you can learn by reading this classic wilderness manual.

Learn some of the old tried and true tricks for bait and trapping, such as creating portable snares or coop traps. These simple techniques make catching animals such as beavers, partridge, raccoons, and rabbits on your next camping trip a cinch. While the book includes numerous effective traps, it promotes a conservationist hunting style by encouraging readers to respect animals and to never pursue trap-making out of cruelty. The guide also includes information on how to make the most out of your catch, with recipes for making venison jerky, gutting fish, and instructions on curing and tanning fur skins.

​Charming sketches throughout the book lend to the nostalgia of this timeless guide and depict many of the traps used when Camp Life in the Woods and the Tricks of Trapping was first published in 1882. This book is a perfect gift for the outdoorsman interested in learning new camping techniques, and the historian who will delight in the author’s details about life as a trapper in the late nineteenth century.

William Hamilton Gibson: William Hamilton Gibson was an American illustrator, author, lecturer, and naturalist. He rose to prominence when his illustrations were featured in Harper’s Monthly magazine. His works include Happy Hunting Grounds, Our Edible Mushrooms and Toadstools, Afield with Nature among Flowers and Animate Things, among others. He died in 1896.