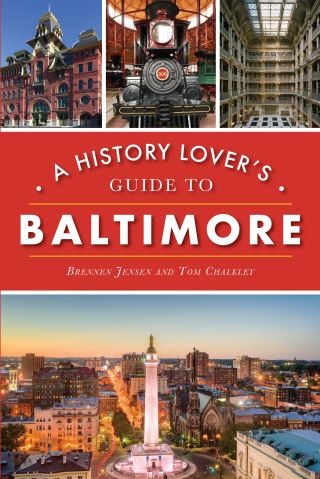 A History Lover's Guide to Baltimore

Neither southern nor northern, Baltimore has charted its own course through the American experience. The spires of the nation's first cathedral rose into its sky, and the first blood of the Civil War fell on its streets. Here, enslaved Frederick Douglass toiled before fleeing to freedom and Billie Holiday learned to sing. Baltimore's clippers plied the seven seas, while its pioneering railroads opened the prairie West. The city that birthed "The Star-Spangled Banner" also gave us Babe Ruth and the bottle cap. This guide navigates nearly three hundred years of colorful history--from Johns Hopkins's earnest philanthropy to the raucous camp of John Waters and from modest row houses to the marbled mansions of the Gilded Age. Let local authors Brennen Jensen and Tom Chalkley introduce you to Mencken's "ancient and solid" city.

Brennen Jensen: Brennen Jensen has written about Baltimore for more than thirty years, seven of those on staff at the Baltimore City Paper. A former senior writer for the Chronical of Philanthropy, he has also written for National Public Radio, CityLab, Residential Architect, Urbanite and national lifestyle publications such as Garden & Gun and the Local Palate. Tom Chalkley is an illustrator and writer, as well as a lifelong Marylander and Baltimorean since 1979. He contributed to the Baltimore City Paper from 1978 to 2008 and co-wrote, with Brennen Jensen and Charles Cohen, the paper's "Charmed Life" column about Baltimore history, culture and characters.|||