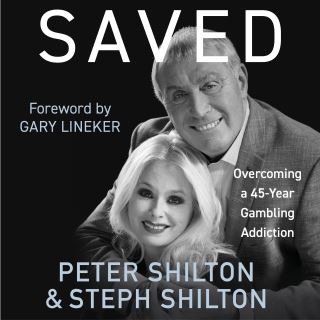 After a trophy-laden and record-setting club and international career, England’s greatest ever goalkeeper, Peter Shilton, could rightly look forward to an equally successful post-playing career. But a gambling habit forged in his playing days soon spiralled into a gambling addiction: a silent, self-destructive and ruinous obsession that destroyed relationships, his mental health and very nearly himself.

With the love and support of his wife Steph, he was able to face up to his addiction, find hope for the future and overcome his 45-year secret and turn his life around.

Peter and Steph – who has over 20 years’ experience working in the NHS – now campaign to raise awareness of this, and other destructive addictions, helping both addicts and their partners weather the long and arduous journey back to recovery. Their support for and work with 'The Big Step' campaign aims to bring in stricter advertising controls and team kit sponsorship rules.

Steph and Peter bravely tell both sides of their journey with a direct honesty and an empathy born of real-life experience, offering advice and hope to not only those affected by gambling, but sufferers of other chronic addictions. They also shine a light on football’s obsession with gambling, taking millions of pounds from the gambling sites and bookies who sponsor the game, while neglecting to support both the players and fans who fall prey to addiction.

This is the ultimately uplifting story of how he was saved – by Steph’s love and support, and his own strength and determination.

Peter Shilton: Peter Shilton started as an apprentice goalkeeper at Leicester City at the tender age of 15, making his first team debut at 16 – the youngest player ever to play for Leicester at that time. He went on to win two European cups and a league title with Nottingham Forest, and to play in three World Cups for England during a 30-year professional football career. Peter received an OBE for his contribution to football, and is regarded as one of the greatest goalkeepers of all time, ranked in the FIFA top 100 legends. Sadly, in Peter’s private life he suffered a 45-year gambling addiction until he met Steph, his wife.|||Steph Shilton worked as a manager in this NHS for over 20 years and is also an accomplished blues and jazz singer. Steph met Peter at the beginning of 2012, and they married in December 2016.