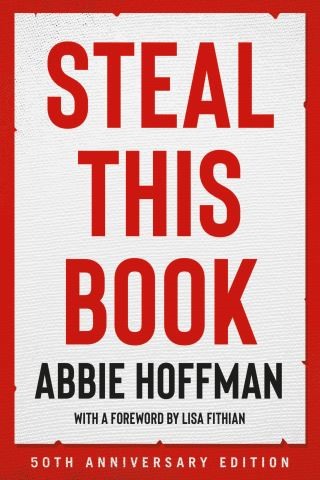 Still Notorious, Radical, and Revolutionary 50 Years Later.
A survival guide from one of the greatest creative organizers of the 20th century—now with a new foreword by co-conspirator, Lisa Fithian.

Throughout the 1960's and 70's, Abbie Hoffman criss-crossed the country, ferreting out alternative ways of getting by in America—some illegal and all radical. Causing scandals with its advice on how to Survive!, Fight!, and Liberate! in the “prison that is Amerika,” Steal This Book is a revolutionary's manual to running a guerilla movement, as well as getting free food, housing, transportation, medical care, and more.

This anniversary edition gives a new generation an insider's view into the movements of the sixties and seventies. While many of the holes in the system that Abbie exposed have since been plugged, the spirit of revolution, the dedication to opposing injustice, and the passion of creative activism continue to inspire today.

Abbie Hoffman: Abbie Hoffman (1936-1989) was an American activist and revolutionary political organizer in the civil rights and anti-war movements who co-founded the Youth International Party (“Yippies”). He was arrested and tried for his role in protests that were confronted violently by police during the 1968 Democratic National Convention and began to write Steal This Book in jail while awaiting what became known as the Trial of the Chicago Seven. Hoffman continued his activism through the 1980's and remains an icon of countercultural movements today.