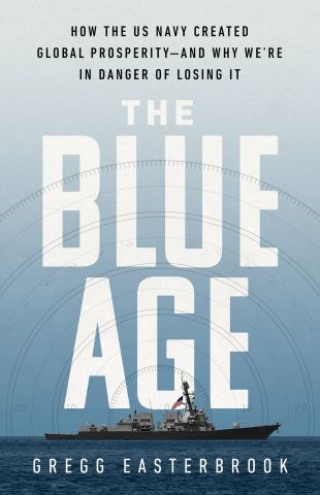 The US Navy brought half a century of peace and free trade to the world’s waterways. But climate change and rising nationalism threaten to end this blue age.

For decades, the Navy has stood sentinel over crucial waterways, ensuring safe passage of goods from nearly all nations. The result is the longest phase of peace on the waters since the Phoenicians, with rising living standards, more (total) jobs, and the dramatic decline of poverty in Asia.

But these prosperous times could be at an end. Today China is building warships at an extraordinary pace. India, Japan, Vietnam, and Europe are responding with more fighting ships. What will result from China’s rising naval might, particularly in the South China Sea? As ocean resources are shaped by climate change and new discoveries, will the world share them or fight over them? What will happen if America turns against free trade? Without American investment, the world could see a rise of supply shortages and seagoing conflict that would dwarf the impact of the container ship stuck in the Suez Canal.

Surveying naval history, economics, environmental threats, and great-power politics, The Blue Age makes an urgent argument about our oceans’ vital importance to the peace and prosperity of our global community.

Gregg Easterbrook: Gregg Easterbrook is the author of twelve books, most recently It’s Better Than It Looks: Reasons for Optimism in an Age of Fear (2018). He was a staff writer, national correspondent, or contributing editor at The Atlantic for nearly forty years. Easterbrook has written for The New Yorker, Science, Wired, Harvard Business Review, the Washington Monthly, the New Republic, the New York Times, the Wall Street Journal, and the Los Angeles Times. He was a fellow in economics and in government studies at the Brookings Institution. In 2017 he was elected to the American Academy of Arts and Sciences.