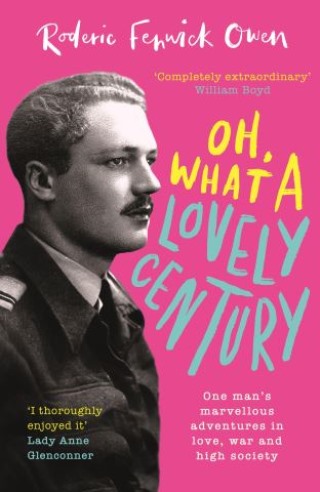 Oh, What a Lovely Century

One man's marvellous adventures in love, war and high society

A TIMES BOOK OF THE YEAR

'A completely extraordinary autobiography. One that reads like the most outlandish, beguiling fiction but that is - amazingly - all true' - William Boyd, Sunday Times bestselling author

'Outrageous fun...my goodness there are knee-tremblers galore in this racy memoir' - The Times

'A wonderful journey through 20th Century history. I thoroughly enjoyed it' - Lady Anne Glenconner, author of Lady in Waiting

For fear of growing up like his stiff-upper-lipped Uncle Dick, Roderic Fenwick Owen (1921-2011) survived Eton, Oxford and the Second World War to become a travel writer, experiencing the varied wonders of the 20th century's people and places in that guise. Frequently finding himself party to crucial historical events (including experiencing Nazi Germany in 1939 and the Pentagon during the Cold War Years), his life featured a stellar cast of characters from Eisenhower and Jackson Pollock to Christopher Lee and Sean Connery.

At the heart of Roddy's writing adventures lay his search for love, even if just for the night. He fell head over heels for, and married a Polynesian princess while beachcombing in Tahiti, but when a dazzling trip to 1950s New York opened his eyes to the fact he was more attracted to men than women, he was forced to continue his quest for his soulmate under threat of danger. This was at a time when the police were prosecuting and imprisoning more gay men than ever before, including some of his friends.

Lyrical, witty and at times jaw-droppingly unbelievable, Oh, What A Lovely Century is both a highly personal memoir and a marvellous obituary of an ever-changing and now lost world - that was frequently the best of times, and sometimes the worst.

'Stuffed to the gills with raucous anecdotes and mesmerising detail ... Fenwick Owen's memoirs are witty and touching but also an important record of how society has changed' - Jessica Fellowes, author of The Mitford Murders

Roderic Fenwick Owen: Roderic Fenwick Owen (1921-2011), a relation of a jockey who won the Grand National, the founder of the National Trust, the High Sheriff of Lincolnshire and as many Dukes and Duchesses as you like, was at one time or another a travel writer, a beachcomber, a husband to a Polynesian princess, a painter, a court poet and a Royal Air Force veteran. He was at all times a romantic and never passed up on love, even if only for the night. He died shortly before his 90th birthday and left behind three Encyclopedia-sized volumes of memoirs, which have been abridged into the book OH, WHAT A LOVELY CENTURY.