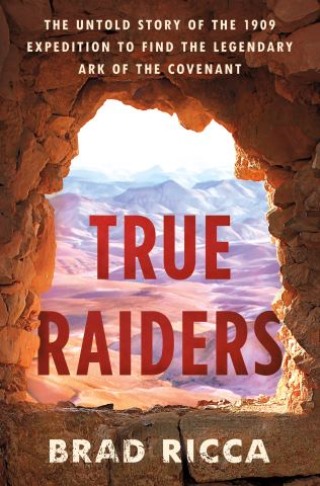 This book tells the untold true story of Monty Parker, a British rogue nobleman who, after being dared to do so by Ava Astor, the so-called “most beautiful woman in the world,” headed a secret 1909 expedition to find the fabled Ark of the Covenant. Like a real-life version of Raiders of the Lost Ark, this incredible story of adventure and mystery has almost been completely forgotten today.

In 1908, Monty is approached by a strange Finnish scholar named Valter Juvelius who claims to have discovered a secret code in the Bible that reveals the location of the Ark. Monty assembles a ragtag group of blueblood adventurers, a renowned psychic, and a Franciscan father, to engage in a secret excavation just outside the city walls of Jerusalem.

Using recently uncovered records from the original expedition and several newly translated sources, True Raiders is the first retelling of this group’s adventures– in the space between fact and faith, science and romance.

Brad Ricca: BRAD RICCA earned his Ph.D. in English from Case Western Reserve University where he currently teaches. The author of Super Boys, he has spoken on comics at various schools and museums, and he has been interviewed about comics topics by The New York Daily News, The Wall Street Journal, and All Things Considered on NPR. His film Last Son won a 2010 Silver Ace Award at the Las Vegas International Film Festival. He lives in Cleveland, Ohio.