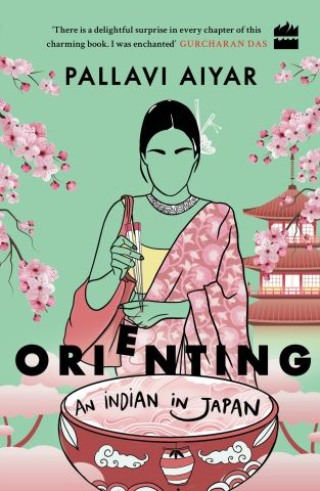 An Indian in Japan

How is Tokyo, a city of thirty million people, so safe that six-year-old children commute to school on their own? Why are there no trashcans in Japanese cities? Why are Ganesha idols in Japanese temples hidden from public view? Globe-trotting journalist Pallavi Aiyar moves to Japan and takes an in-depth look at the island country including its culinary, sanitary and floral idiosyncrasies. Steering through the many (mis)adventures that come from learning a new language, imbibing new cultural etiquette, and asking difficult questions about race, Aiyar explores why Japan and India find it hard to work together despite sharing a long civilizational history. Part travelogue, part reportage, Orienting answers questions that have long confounded the rest of the world with Aiyar's trademark humour. Tackling both the significant and the trivial, the quirky and the quotidian, here is an Indian's account of Japan that is as thought-provoking as it is charming.

Pallavi Aiyar: Award-winning journalist Pallavi Aiyar has spent several years reporting from, and parenting in, China, Europe and Indonesia. She is the author of Smoke and Mirrors, Chinese Whiskers and Punjabi Parmesan. Pallavi is a World Economic Forum Young Global Leader, and a former Reuters Fellow at Oxford University.