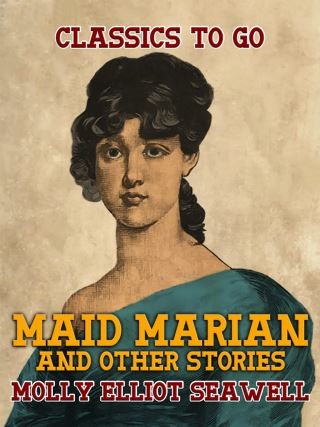 Maid Marian, and other stories

Excerpt: "Yes, it was surely the embodiment of feminine beauty—the dark, narrow-lidded eyes, wide apart—did you ever notice the terrible intelligence in the eyes of a portrait?—the slim patrician nose, the hair so quaintly coifed with pearl, the uplifted hand: no wonder that Macfarren gazed at it with something like reverence. You will be apt to imagine that Macfarren was an enthusiast, possibly with darkly curling hair and of a Byronic-Dantesque cast of countenance. Quite the contrary. He was a keen-witted, hard-headed New York lawyer fast galloping out of his forties—a well-made, well-dressed man, with a clear-cut, sensible face. His hair had been trifled with by the hand of Time, and what remained is not worth describing. Nor was the place sanctified by the lady Marian's portrait a Norman abbey, nor yet a battlemented castle. It was a room sliced off from the place where the housemaids kept their brooms and dust-pans on the third floor of a New York hotel. Macfarren had kept those rooms for twenty years. Meanwhile, bachelors' flats had sprung up all over town, but he was conservative and kept his modest suite of two rooms until the advent of the Lady Marian made another room a necessity."

Molly Elliot Seawell: Molly Elliot Seawell (October 23, 1860 – November 15, 1916) was an early American historian and writer. Seawell was a descendant of the Seawells of Virginia. She was a niece of President John Tyler. Reared upon a large plantation, she was educated somewhat after her own way, "turned loose in a library of good books." In her father's home, was found the best literature of the 18th century. She read these English classics, and was especially fond of poetry. She did not read a novel until after she was 17, and the first was Goldsmith's The Vicar of Wakefield. Her three amusements were reading, riding and piano-playing. Her father, a prominent lawyer, died just as Seawell reached womanhood. She sent some stories to "Lippincott's Magazine." William S. Walsh was then editor, and he recognized the ability of the writer to be unusual, and encouraged her from the beginning. Her first stories were signed with a pen-name. Her friends persuaded her to sign her own name, but not until Maid Marian was published would she consent. This was undoubtedly her best story. She ventured into the field of juvenile literature when she sent Little Jarvis to "Youth's Companion" to contend for the US$500 prize. Possibly, Seawell's essay On the Absence of Creative Faculty in Women attracted more attention than any of her books. Women answered it, and the discussion was joined by Andrew Lang, Thomas Wentworth Higginson, and others. The Critic said that essay attracted more attention than any single article ever published in its columns. In style, Seawell was said to resemble Jane Austen. Seawell's works, besides numerous short stories, included: Young Heros of our Navy, Maid Marian and Other Stories, Midshipman Paulding, Hale Weston, Paul Jones, and The Midshipmen's Mess.