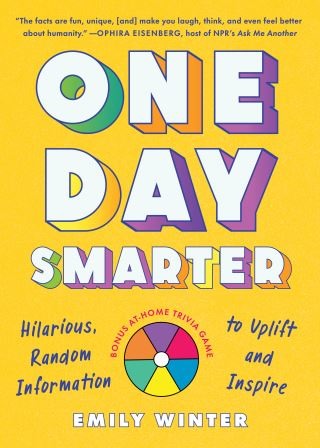 Dominate trivia night, liven up a date, and impress everyone you know with this funny, weird, smart book of little-known facts.


Did you know a group of bunnies is called a fluffle? Or that the people who voiced Mickey and Minnie Mouse were married in real life? How about this one: In ancient Persia, government officials debated laws twice—once sober and once drunk?

We could all use a little good news right now. Comedian and writer Emily Winter is here to tell you confidently that there is kindness, beauty, empathy, humor, resilience, wonder, silliness, cuteness, strength, hope, and joy in our world. With this book in hand, you can make yourself that much smarter while also lighting up your brain with positivity.

Emily Winter: Emily Winter is a comedian and writer for the NPR trivia show Ask Me Another. She’s also written for The New Yorker’s Daily Shouts, TV Land, Fusion TV, Glamour, The Barnes & Noble Review, and The New York Times. Her stand-up comedy plays on Sirius XM, and she emcees and produces an annual, sixty-four-comedian one-liner joke contest called One Liner Madness in New York. Winter is also a judge for NBC’s Late Night Writers Workshop and the Women in Comedy Festival, and she hosts the podcast Comedians with Ghost Stories. Winter has appeared on the Today show and the TED WorkLife with Adam Grant podcast, and her work has been written about on or in Buzzfeed, the AV Club, Lifehacker, The Boston Globe, the Miami New Times, The Brooklyn Paper, Bustle, HelloGiggles, and others. She lives in Brooklyn.