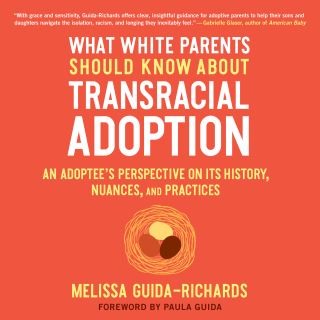 What White Parents Should Know about Transracial Adoption

An Adoptee's Perspective on Its History, Nuances, and Practices

The White Fragility for transracial adoption--practical tools for nurturing identity, unlearning white saviorism, and fixing the mistakes you don't even know you're making.

If you're the white parent of a transracially or internationally adopted child, you may have been told that if you try your best and work your hardest, good intentions and a whole lot of love will be enough to give your child the security, attachment, and nurturing family life they need to thrive.

The only problem? It's not true. What White Parents Need to Know About Transracial Adoption breaks down the dynamics that frequently fly under the radar of the whitewashed, happily-ever-after adoption stories we hear so often.

Written by Melissa Guida-Richards--a transracial, transnational, and late-discovery adoptee--this book unpacks the mistakes you don't even know you're making and gives you the real-life tools to be the best parent you can be, to the child you love more than anything.

From original research, personal stories, and interviews with parents and adoptees, you'll learn:
•  What parents wish they'd known before they adopted--and what kids wish their adoptive parents had done differently
•  What white privilege, white saviorism, and toxic positivity are...and how they show up, even when you don't mean it
•  How your child might feel and experience the world differently than you
•  All about microaggressions, labeling, and implicit bias
•  How to help your child connect with their cultural heritage through language, food, music, and clothing
•  The 5 stages of grief for adoptive parents
•  How to start tough conversations, work with defensiveness, and process guilt

Melissa Guida-Richards: MELISSA GUIDA-RICHARDS is an author, adoptee, and advocate based in Pennsylvania. She was adopted in 1993 from Colombia to a family in the USA. Her viral essay, "My Adoptive Parents Hid My Racial Identity From Me for 19 Years," was published in Huffington Post in April 2019. She soon launched the Adoptee Thoughts Instagram and Podcast to help elevate adoptee voices and educate adoptive parents on the nuances and complexity of adoption.

Guida-Richards graduated from SUNY Fredonia in 2015 and published her first book Bedtime, The Ultimate Battle in January 2020. Her work has appeared in Huffington Post, Zora by Medium, ElectricLit, and more. She has been on podcasts such as NPR's Code Switch, BBC Radio 4, The Adoption and Fostering Podcast, and Do the Work, and has appeared on panels such as We the Experts: Adoptee Speaker Series. Guida-Richards is also a contributing editor at The Everymom.