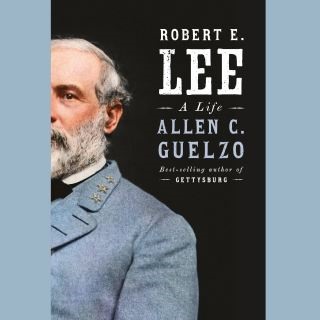 From the award-winning historian and best-selling author of Gettysburg comes the definitive biography of Robert E. Lee. An intimate look at the Confederate general in all his complexity—his hypocrisy and courage, his inner turmoil and outward calm, his disloyalty and his honor.

Robert E. Lee is one of the most confounding figures in American history. Lee betrayed his nation in order to defend his home state and uphold the slave system he claimed to oppose. He was a traitor to the country he swore to serve as an Army officer, and yet he was admired even by his enemies for his composure and leadership. He considered slavery immoral, but benefited from inherited slaves and fought to defend the institution. And behind his genteel demeanor and perfectionism lurked the insecurities of a man haunted by the legacy of a father who stained the family name by declaring bankruptcy and who disappeared when Robert was just six years old.

In Robert E. Lee, the award-winning historian Allen Guelzo has written the definitive biography of the general, following him from his refined upbringing in Virginia high society, to his long career in the U.S. Army, his agonized decision to side with Virginia when it seceded from the Union, and his leadership during the Civil War. Above all, Guelzo captures Robert E. Lee in all his complexity--his hypocrisy and courage, his outward calm and inner turmoil, his honor and his disloyalty.

Allen C. Guelzo: ALLEN C. GUELZO is Senior Research Scholar at the Council of Humanities at Princeton University. He is the author of several books about the Civil War and early nineteenth-century American history. He has been the recipient of the Lincoln Prize three times, the Guggenheim-Lehrman Prize for Military History, and many other honors. He lives in Pennsylvania.