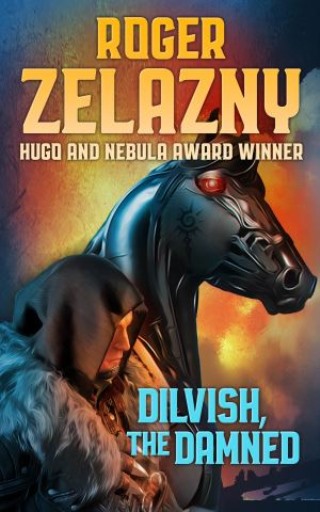 Dilivish, a half elf-half man hybrid failed in his attempt to rescue a young maiden being ritually sacrificed by the dark sorcerer Jelerak. In his anger at the attempt Jelerak kills the maiden and turns Dilvish’s body to stone and banished his soul to Hell. It takes Dilvish two hundred years to escape Hell and reclaim his body. Dilvish does not leave hell unprepared. He returns with a number of very powerful spells and a faithful metal steed, Black who is far more than he seems. Together Black and Dilvish plan to hunt down Jelerak and make him pay. Heroic fantasy at it’s finest from a master storyteller. This edition has a bonus preview chapter from the Dilvish, the Damned novel The Changing Land. Roger Zelazny was a science fiction and fantasy writer, a six time Hugo Award winner, and a three time Nebula Award Winner. He published more than forty novels in his lifetime. His first novel This Immortal, serialized in The Magazine of Fantasy and Science Fiction under the title “...And Call Me Conrad,” won the Hugo Award for best novel. Lord of Light, his third novel, also won the Hugo award and was nominated for the Nebula award. He died at age 58 from cancer. Zelazny was posthumously inducted into the Science Fiction Hall of Fame in 2010. “A storyteller without peer. He created worlds as colorful and exotic and memorable as any our genre has ever seen.” —George R.R. Martin “. . . his performance was never anything other than dazzling.” —Robert Silverberg “Roger Zelazny’s work excited me. It was intoxicating and delightful and unique. And it was smart.” —Neil Gaiman