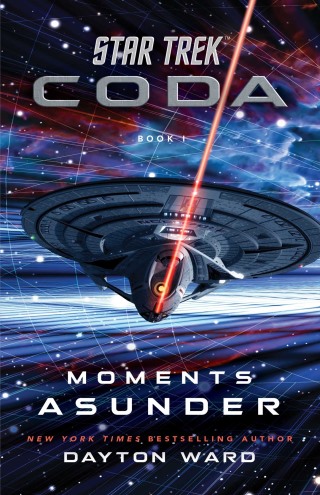 The crews of Jean-Luc Picard, Benjamin Sisko, Ezri Dax, and William Riker unite to prevent a cosmic-level apocalypse—only to find that some fates really are inevitable.

STARFLEET’S FINEST FACES A CHALLENGE UNLIKE ANY OTHER

TOMORROW IS DOOMED
Time is coming apart. Countless alternate and parallel realities are under attack, weakening and collapsing from relentless onslaught. If left unchecked, the universe faces an unstoppable descent toward entropy.

WANDERER, ORACLE, ALLY
Scarred and broken after decades spent tracking this escalating temporal disaster, while battling the nameless enemy responsible for it, an old friend seeks assistance from Captain Jean-Luc Picard and the crew of the Starship Enterprise. The apocalypse may originate from their future, but might the cause lie in their past?

EVERYTHING THAT WILL BE
Identifying their adversary is but the first step toward defeating them, but early triumphs come with dreadful costs. What will the price be to achieve final victory, and how will that success be measured in futures as yet undefined?

Dayton Ward: Dayton Ward is the New York Times bestselling author or coauthor of nearly forty novels and novellas, often working with his best friend, Kevin Dilmore. His short fiction has appeared in more than twenty anthologies, and he’s written for magazines such as NCO Journal, Kansas City Voices, Famous Monsters of Filmland, Star Trek, and Star Trek Communicator, as well as the websites Tor.com, StarTrek.com, and Syfy.com. A native of Tampa, Florida, he currently lives in Kansas City, Missouri with his wife and two daughters. Visit him on the web at DaytonWard.com.