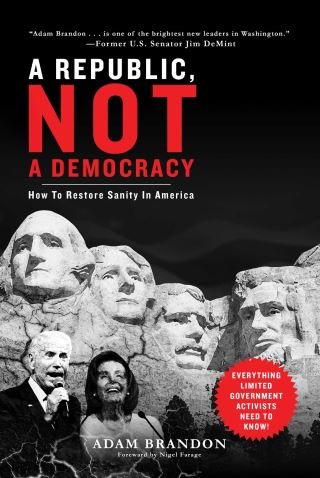 Republic, Not a Democracy

How to Restore Sanity in America

Let Adam Brandon, one of America’s leading activists, explain the past, the present, and the future of American conservatism, and offer advice from his unique perspective on how to bridge the generational and political divides in the United States for a better future.

America faces incredibly consequential choices over the direction of the nation. Far-left Democrats who label themselves as “progressives” want to shatter constitutional norms and move America backward through command-and-control economic policies while continuing to divide us with identity politics.

In A Republic, Not a Democracy, FreedomWorks President Adam Brandon draws on his experiences from when he was a kid in Ohio, his time in post-communist Poland, and his current role in Washington, DC to offer perspective on the choices that America has before it. He uses these experiences to provide a unique take on how to win voters with a pro-growth message on economic policy.

Drawing on the story of 2019—when America saw its lowest unemployment rate in a half-century and a record low poverty rate—Adam explains how we can restore America in a post-COVID-19 pandemic world. He highlights key policy issues like education, health care, and the age-demographic crisis and what lawmakers can do to address these problems.

As president of the country’s largest free-market grassroots advocacy organization, Adam is the nation’s foremost expert in effective grassroots strategy. He uses this expertise to explain the importance of grassroots activists and using these committed constitutionalists to change the minds of lawmakers in the Swamp.

A Republic, Not a Democracy is an essential resource for anyone seeking to understand the state of modern politics, for anyone who wants to use grassroots activism to make a difference in the world, and for anyone who wonders about what the future holds for America and its citizens.

Adam Brandon: Adam Brandon is the president of FreedomWorks, the largest free-market grassroots advocacy organization in the country, which helps over six million activists. He has been published in and quoted by, among others, Fox News, The Wall Street Journal, The New York Times, The Washington Post, Forbes, and The Hill. He earned a B.A. from George Washington University and master’s degrees from Georgetown University, George Washington University, and Jagiellonian University in Krakow, Poland. When he's not in a suit, he can be found watching the Cleveland Browns with his wife.