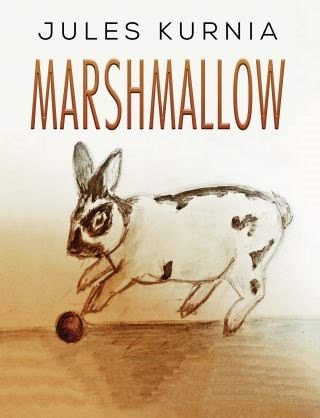 Sat all alone huddled into a corner of his cage, with a note on the front saying, “through no fault of his own he needed a new home.” That’s where Isabelle first met Marshmallow the little black and white rabbit. With beautiful soft fur and a nose that needed to be stroked, surely an innocent little rabbit would be no trouble?
Join Isabelle in this true story about Marshmallow, the mischievous rabbit! He is of course very lovely, and loves cuddles and nose strokes, he is a very caring rabbit who even looks after Isabelle’s dog, Alfie, when he gets sick. But do not be fooled! Underneath his fluffy cuteness lies a very clever little rabbit who just loves to get into all kinds of trouble. From breaking out of his cage to running off with Isabelle’s toys and chewing everything he can, this book will share what it is really like to have a clever little rabbit!

Jules Kurnia: Growing up in Bournemouth, Dorset, Jules had three cats, gerbils, hamsters, guinea pigs and a rabbit, most of which lived in her bedroom! As a child Jules wrote short stories about her pets and spent hours drawing and painting them. Now a mother to her daughter Isabelle, Jules wrote and illustrated stories for her daughter during the first lockdown about their furry family members, Marshmallow the rabbit and their dogs, Chachi and Alfie. With the libraries closed during the lockdown, she felt her daughter, who was five at the time and who had just started to learn to read, needed new reading books she could relate to and would find funny during a difficult time.