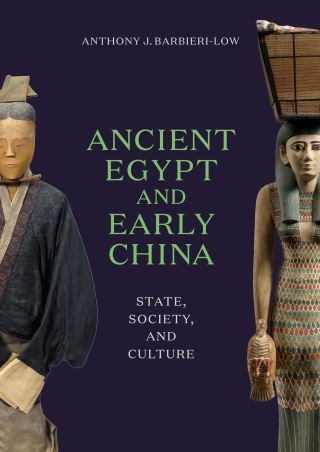 Although they existed more than a millennium apart, the great civilizations of New Kingdom Egypt (ca. 1548–1086 BCE) and Han dynasty China (206 BCE–220 CE) shared intriguing similarities. Both were centered around major, flood-prone rivers—the Nile and the Yellow River—and established complex hydraulic systems to manage their power. Both spread their territories across vast empires that were controlled through warfare and diplomacy and underwent periods of radical reform led by charismatic rulers—the “heretic king” Akhenaten and the vilified reformer Wang Mang. Universal justice was dispensed through courts, and each empire was administered by bureaucracies staffed by highly trained scribes who held special status. Egypt and China each developed elaborate conceptions of an afterlife world and created games of fate that facilitated access to these realms.

This groundbreaking volume offers an innovative comparison of these two civilizations. Through a combination of textual, art historical, and archaeological analyses, Ancient Egypt and Early China reveals shared structural traits of each civilization as well as distinctive features.

Anthony J. Barbieri-Low is professor of history at the University of California Santa Barbara. His book Artisans in Early Imperial China won top prizes from the Association for Asian Studies, American Historical Association, College Art Association, and International Convention of Asia Scholars. Marissa Stevens is assistant director of the Pourdavoud Center for the Study of the Iranian World at the University of California, Los Angeles.