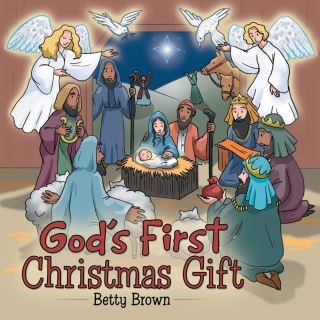 Christmas was approaching.  I had been asking God to help me tell the Christmas story to my Kindergarten class in a way that they had not heard it before.  I was prepared with my illustrations as we sat on the floor together.  Suddenly, I realized that I was telling it in poetry form from beginning to end.  It was coming from my heart in a Biblical account, but in children’s language.  God was answering my prayer.  The children wanted to hear it again and again.  I soon realized I had no way of retrieving the words because they had never been written. Late that evening, when all was quiet, I sat down with paper and pencil, said a quick prayer, and it all came back to me word for word.  God had answered my prayer again as I wrote the book entitled “God’s First Christmas Gift”.

Betty Brown began working with preschool children, in 1971, while living in California. After moving to New Jersey, she taught Kindergarten in a private Christian school for 20 years and then opened her “Little Stars” home school. Betty is especially gifted in storytelling either Biblical or classics. She has also had the privilege of having been Director of Vacation Bible School for 24 years with 200 plus children in attendance. She has conducted Children’s Church, the Academy Chorus, as well as Talent Night for teens. Betty has been involved in numerous speaking engagements for women’s retreats as well as Women’s Aglow. She is presently involved in women’s Bible studies in her church and also in her home. Her hobbies include reading, writing and playing the cello. She started cello lessons at age six and has played in orchestras in New Jersey and California. Presently, she plays on the worship team at her church. She and her husband, Bill, are retired and enjoying their adult children and eight grandchildren.