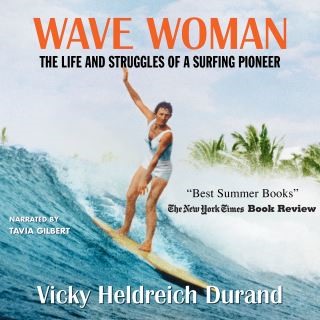 The Life and Struggles of a Surfing Pioneer

Wave Woman is the untold story of an adventurer whose zest for life and learning kept her alive for ninety-eight years. Betty Pembroke Heldreich Winstedt was the granddaughter of Mormon pioneers who, after spending an active and athletic childhood in Salt Lake City, moved to Santa Monica with her family and enrolled at USC to study dental hygiene. Betty went on to elope with a man she hardly knew, and to have two daughters.

In middle age, Betty finally followed her dream of living near the ocean; she moved to Hawaii and, at age forty-one, took up surfing. She lived and surfed at Waikiki during the golden years of the mid-1950s and was a pioneer surfer at Makaha Beach. She was competitive in early big-wave surfing championships and was among the first women to compete in Lima, Peru, where she won first place. Betty was an Olympic hopeful, a pilot, a mother, a sculptor, a jeweler, a builder, a fisherwoman, an ATV rider, and a potter who lived life her way, dealing with adversity and heartache on her own stoic terms. A love letter from a daughter to her larger-than-life mother, Wave Woman will speak to any woman searching for self-confidence, fulfillment, and happiness.

Vicky Heldreich Durand first fell in love with Hawaii at age twelve, when she spent a summer with her aunt and uncle on the island of Molokai. She returned home and talked her mother, Betty, into a trip the following summer, and by the following winter, Betty, Vicky, and Vicky’s sister had moved to Honolulu. Vicky spent her formative years surfing with her mother; they both competed in the Makaha International Surfing Contest in Hawaii, and they traveled as invited guests to Lima, Peru, on behalf of the Club Waikiki’s efforts to interest women in surfing. Over the years, Vicky has established and directed a cottage sportswear company, worked as a Title 1 high school teacher, collaborated with community groups to provide better services for her students, and successfully pursued grant funding for various programs to support teen parents. Today, she serves as a member of the Liljestrand Foundation Board with her husband, Bob Liljestrand. She is the mother of two grown daughters, has six grandchildren, gardens avidly, and is passionately involved in animal rescue, working mainly with cats and dogs. Wave Woman is her first book.