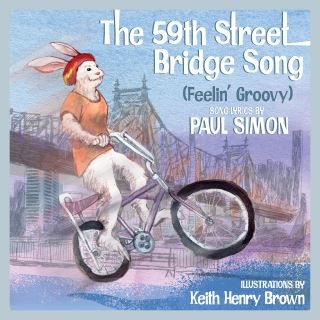 "Slow down, you move too fast
You got to make the mornin' last
Just kicking down the cobblestones
Lookin' for fun and feelin' groovy..."

The 59th Street Bridge Song is a lively picture book based on legendary songwriter Paul Simon's classic hit, created when he was one half of the folk rock duo Simon & Garfunkel. The song first appeared on their 1966 album Parsley, Sage, Rosemary and Thyme. In the US, the album peaked at #4 on Billboard's weekly Top 200 albums chart, and eventually went on to sell over three million copies in the US.

With song lyrics by Simon and illustrations by Keith Henry Brown, this picture book follows a rabbit cycling through town, going about his day, and pausing to admire the "groovy" and lovable aspects of his surroundings. The 59th Street Bridge Song provides parents a perfect vehicle to teach kids an appreciation of life's little gifts.

Paul Simon: Paul Simon has received many honors and prizes including twelve GRAMMY Awards, three of which—for Bridge Over Troubled Water, Still Crazy After All These Years, and Graceland—were albums of the year. In 2003 he received a GRAMMY Lifetime Achievement Award for his work as half of the duo Simon & Garfunkel. He is a member of the Songwriters Hall of Fame, a recipient of their Johnny Mercer Award, and is in the Rock & Roll Hall of Fame both as a member of Simon & Garfunkel and as a solo artist. His song “Mrs. Robinson” from the motion picture The Graduate was named in the top ten of the American Film Institute’s 100 Years . . . 100 Songs list.