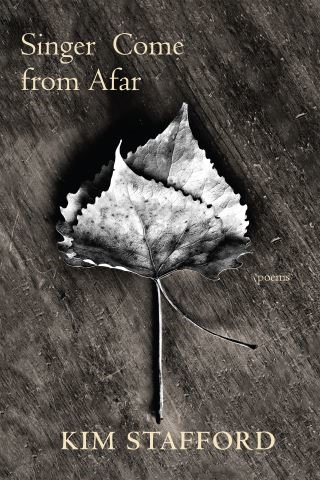 The five sections in Kim Stafford’s Singer Come from Afar hold poems that summon war and peace, pandemic struggles, Earth imperatives, a seeker’s spirit, and forge kinship. The former poet laureate of Oregon, Stafford has shared poems from this book in libraries, prisons, on reservations, with veterans, immigrants, homeless families, legislators, and students in schools. He writes for hidden heroes, resonant places, and for our chance to converge in spite of differences. Poems like “Practicing the Complex Yes” and “The Fact of Forgiveness” engineer tools for connection with the self, the community, and the Earth: “It is a given you have failed . . . [but] the world can’t keep its treasures from you.” For the early months of the pandemic, Stafford wrote and posted a poem for challenge and comfort each day on Instagram and published a series of chapbooks that traveled hand to hand to far places—to Norway, Egypt, and India. He views the writing and sharing of poetry as an essential act of testimony to sustain tikkun olam, the healing of the world. May this book be the hidden spring you seek.

Kim Stafford is a writer and teacher in Oregon, and the founding director of the Northwest Writing Institute at Lewis & Clark College. His poetry titles include A Gypsy’s History of the World (Copper Canyon Press, 1976) and Wild Honey, Tough Salt (Red Hen Press, 2019). He has published a biography, Early Morning: Remembering My Father, William Stafford (Graywolf Press, 2002); a children’s book, We Got Here Together (Houghton Mifflin Harcourt, 1987); and a book about writing and teaching: The Muses Among Us: Eloquent Listening and Other Pleasures of the Writer’s Craft (University of Georgia Press, 2003). His work has been translated into Japanese, French, and Spanish, and featured on The Writer’s Almanac, and his books have received awards from the Pacific Northwest Booksellers and the Western States Book Awards. Stafford has received two NEA Creative Writing Fellowships in poetry, and has taught writing in Scotland, Italy, Mexico, and Bhutan. He co-founded the annual Fishtrap Writers Gathering in Oregon and teaches regularly at the Hugo House in Seattle. In 2018, he was named Oregon’s Poet Laureate for a two-year term. He teaches and travels to raise the human spirit.