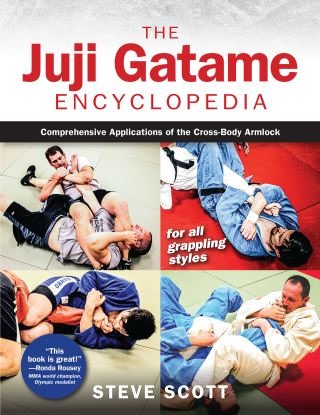 Juji gatame remains the most consistently used joint lock in many grappling sports including judo, sambo, jujitsu, submission grappling, BJJ, and MMA. Athletes and coaches around the world use and respect this game-ending armlock.

Juji gatame was not widely popular until the 1960s, when the sambo grapplers of the former Soviet Union began their innovations with Japanese armlocks and groundfighting. With great success, they took their opponents to the mat, submitting them with never-before-seen applications of juji gatame techniques.

Steve Scott carefully breaks down the basics, analyzes the structure, and offers hundreds of variations so you can successfully win with juji gatame, even under stress.

Steve Scott is a professional judo, sambo and jujitsu coach residing in Kansas City, MO. He holds 8th dan rank in judo and 7th dan rank in shingitai jujitsu. Starting his judo career in 1965 and his sambo career in 1976, He has been active at all levels of competition, coaching and administration in different grappling sports. He has coached four World Sambo Champions, a member of an Olympic Judo Team, and hundreds of medal winners in national and international competitions in judo, sambo, sport jujitsu and submission grappling. He founded the Welcome Mat Judo Club in 1969 where thousands of people have trained in a variety of martial arts.

Steve is the innovator of the Freestyle Judo contest rules used by AAU Judo as well as the innovator in women’s sambo in the U.S., having hosted the first women’s U.S. National Sambo Championships in 1980. He was responsible for the AAU granting recognition to the sport of judo in 1994 after a hiatus of many years.