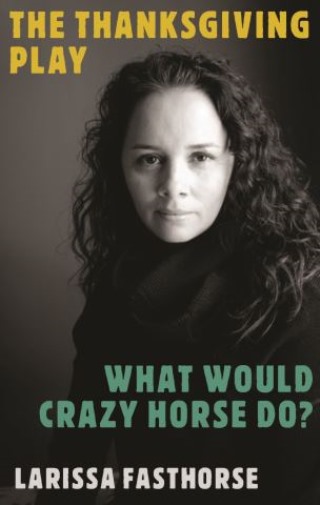 The Thanksgiving Play / What Would Crazy Horse Do?

The Thanksgiving Play had its world premiere Off-Broadway at Playwrights Horizons in the fall of 2018.

What Would Crazy Horse Do? had its world premiere at Kansas City Repertory Theatre in the spring of 2017

FastHorse is a Native American playwright and choreographer. She is a member of the Rosebud Sioux Tribe of the Lakota people.

FastHorse is a member of the Playwrights’ Center Core Writers, Playwright’s Union, and Director’s Lab West 2015.

With playwright and performer Ty Defoe, FastHorse founded Indigenous Direction, a consulting firm that helps organizations and individuals who want to create accurate work by, for and with Indigenous peoples.

Larissa FastHorse (Sicangu Lakota Nation) is a writer/choreographer, and co-founder of Indigenous Direction, the nation’s leading consulting company for Indigenous arts and audiences, which recently produced the first land acknowledgment on national television for the Macy’s Thanksgiving Day Parade on NBC. Larissa is the first Native American playwright in the history of American theater to have a play on the top ten most-produced list, with The Thanksgiving Play. Larissa is the recipient of numerous awards, including a MacArthur “Genius” Fellowship. She is working on film and television projects with Disney, NBC, and DreamWorks. She lives in Santa Monica with her husband, the sculptor Edd Hogan.