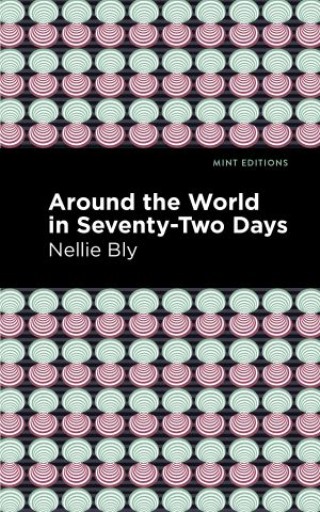 Around the World in Seventy-Two Days

“She was part of the ‘stunt girl’ movement that was very important in the 1880s and 1890s as these big, mass-circulation yellow journalism papers came into the fore.” –Brooke Kroeger

Around the World in Seventy-Two Days (1890) is a travel narrative by American investigative journalist Nellie Bly. Proposed as a recreation of the journey undertaken by Phileas Fogg in Jules Verne’s Around the World in Eighty Days (1873), Bly’s journey was covered in Joseph Pulitzer’s popular newspaper the New York World, inspiring countless others to attempt to surpass her record. At the time, readers at home were encouraged to estimate the hour and day of Bly’s arrival, and a popular board game was released in commemoration of her undertaking.

Embarking from Hoboken, noted investigative journalist Nellie Bly began a voyage that would take her around the globe. Bringing only a change of clothes, money, and a small travel bag, Bly travelled by steamship and train through England, France—where she met Jules Verne—Italy, the Suez Canal, Ceylon, Singapore, Hong Kong, and Japan. Sending progress reports via telegraph, she made small reports back home while recording her experiences for publication upon her return. Despite several setbacks due to travel delays in Asia, Bly managed to beat her estimated arrival time by several days despite making unplanned detours, such as visiting a Chinese leper colony, along the way. Unbeknownst to Bly, her trip had inspired Cosmopolitan’s Elizabeth Brisland to make a similar circumnavigation beginning on the exact day, launching a series of copycat adventures by ambitious voyagers over the next few decades. Despite being surrounded by this air of popularity and competition, however, Bly took care to make her journey worthwhile, showcasing her skill as a reporter and true pioneer of investigative journalism.

With a beautifully designed cover and professionally typeset manuscript, this edition of Nellie Bly’s Around the World in Seventy-Two Days is a classic work of American travel literature reimagined for modern readers.

Nellie Bly (1864-1922) was an American investigative journalist. Born Elizabeth Jane Cochran in a suburb of Pittsburgh, Pennsylvania, she was raised in a family of Irish immigrants. In 1879, she attended Indiana Normal School for a year before returning to Pittsburgh, where she began writing anonymously for the Pittsburgh Dispatch. Impressed by her work, the newspaper’s editor offered her a full-time job. Writing under the pseudonym of Nellie Bly, she produced a series of groundbreaking investigative pieces on women factory workers before traveling to Mexico as a foreign correspondent, which led her to report on the arrest of a prominent Mexican journalist and dissident. Returning to America under threat of arrest, she soon left the Pittsburgh Dispatch to undertake a dangerous investigative assignment for Joseph Pulitzer’s New York World on the Women’s Lunatic Asylum on Blackwell’s Island. After feigning a bout of psychosis in order to get admitted, she spent ten days at the asylum witnessing widespread abuse and neglect. Her two-part series in the New York World later became the book Ten Days in a Mad-House (1887), earning Bly her reputation as a pioneering reporter and leading to widespread reform. The following year, Bly took an assignment aimed at recreating the journey described in Jules Verne’s Around the World in Eighty Days (1873). Boarding a steamer in Hoboken, she began a seventy-two day trip around the globe, setting off a popular trend that would be emulated by countless adventurers over the next several decades. After publishing her book on the journey, Around the World in Seventy-Two Days (1890), Bly married manufacturer Robert Seaman, whose death in 1904 left Bly in charge of the Iron Clad Manufacturing Co. Despite Bly’s best efforts as a manager and inventor, her tenure ultimately resulted in the company’s bankruptcy. In the final years of her life, she continued working as a reporter covering World War I and the women’s suffrage movement, cementing her legacy as a groundbreaking and ambitious figure in American journalism.