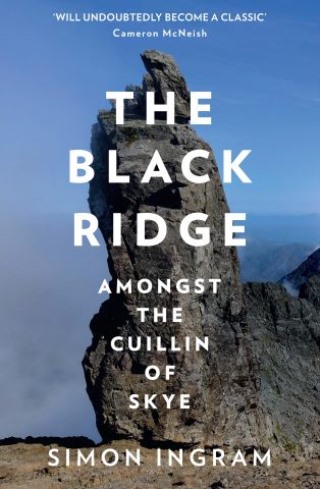 The Black Ridge: Amongst the Cuillin of Skye

will undoubtedly become a classic narrative of this scenically magnificent, legend-rich and geologically unique part of Scotland’ Cameron McNeish, The Herald

Rising a kilometre out of the storm-scoured waters around Scotland’s Isle of Skye is a dark battlement of pinnacles and ridgelines: the Cuillin.

Plagued by ferocious weather and built from rock that tears skin and confounds compasses, a crossing of the Cuillin is the toughest mountaineering expedition in the British Isles. But the traverse is only part of its lure. Hewn from the innards of an ancient volcano, this mountain range stands like a crown on an island drenched in intrigue. While nineteenth-century climbers flocked to the Alps, the ridge lay untrodden and unyielding. When a generation of mountaineers did come, they found a remarkable prize: the last peaks of Britain to be climbed – peaks that would be named after those who climbed them. Along the way, many others, from artists and poets to mystics and wanderers, have been lured by the Cuillin’s haunting beauty and magic. Those who have been seduced by the deadly magic of these mountains attest to the complexity of humans’ relationship with the intrigue of our wildest, most dangerous places.

The Black Ridge is a journey through the history and into the heights of the Cuillin of Skye – from the ridge’s violent birth to the tales of its pioneers, its thrills, its myths and its monsters. From a night spent in a cave beneath its highest peak to the ascent of its most infamous pinnacle, this is an adventure on foot through all seasons across the most mesmerising mountain range in Britain.

Simon Ingram was born in Liverpool in 1981. An internationally-published journalist, his work has appeared in publications including National Geographic, The Independent and The Ernest Journal. He was the editor of Trail magazine for nine years and is a contributor to the Country Diary, The Guardian’s century-old natural history column.

He is the author of Between the Sunset and the Sea (William Collins, 2015) and lives in Stamford, Lincolnshire.