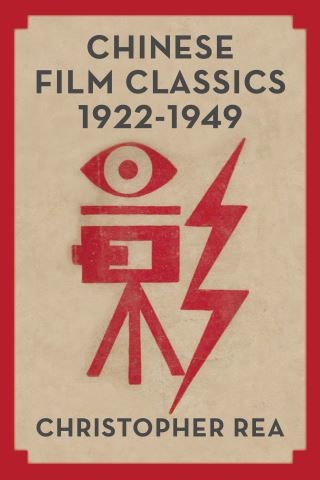 Chinese Film Classics, 1922–1949 is an essential guide to the first golden age of Chinese cinema. Offering detailed introductions to fourteen films, this study highlights the creative achievements of Chinese filmmakers in the decades leading up to 1949, when the Communists won the civil war and began nationalizing cultural industries.

Christopher Rea reveals the uniqueness and complexity of Republican China’s cinematic masterworks, from the comedies and melodramas of the silent era to the talkies and musicals of the 1930s and 1940s. Each chapter appraises the artistry of a single film, highlighting its outstanding formal elements, from cinematography to editing to sound design. Examples include the slapstick gags of Laborer’s Love (1922), Ruan Lingyu’s star turn in Goddess (1934), Zhou Xuan’s mesmerizing performance in Street Angels (1937), Eileen Chang’s urbane comedy of manners Long Live the Missus! (1947), the wartime epic Spring River Flows East (1947), and Fei Mu’s acclaimed work of cinematic lyricism, Spring in a Small Town (1948). Rea shares new insights and archival discoveries about famous films, while explaining their significance in relation to politics, society, and global cinema. Lavishly illustrated and featuring extensive guides to further viewings and readings, Chinese Film Classics, 1922–1949 offers an accessible tour of China’s early contributions to the cinematic arts.

Christopher G. Rea: Christopher Rea is professor of Asian studies at the University of British Columbia. He is the author of The Age of Irreverence: A New History of Laughter in China (2015) and cotranslator of The Book of Swindles: Selections from a Late Ming Collection (Columbia, 2017).