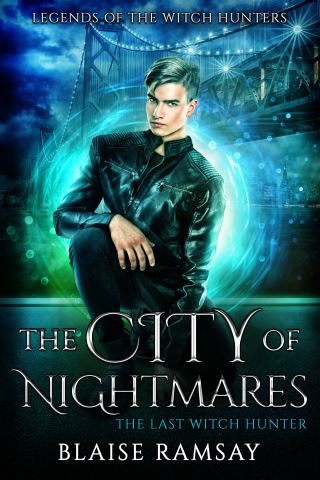 The City of Nightmares

On the night of the Hunter’s Moon, all fell silent as cracks between the cobblestone flooded with streams of red. Monsters who once were men moaned and wailed in the winding alleys of the walled city… Two years ago, Zayne Bishop, the last Witch Hunter, was thrown through a Black Mirror by a vindictive Dark Witch obsessed with using the blood of a dead dark god to enhance her magic. Left half-dead in San Francisco, Zayne met the dhampyre warlock Logan Myre, and the two teamed up to get Zayne home, only to find the answers he sought were in the very world he found himself. Peace is shattered when Zayne receives an invitation from an anonymous client wishing to meet with him. According to her, war is coming between the vampires and witches. Vampires are being slaughtered, their organs stolen. Fae blood is being harvested, leaving husks in their wake. Fear runs rampant in an already unstable Supernatural world. To combat the unrest, Zayne must once again team up with Alexis, Logan, and the newly recruited Wood Elf Ciri to journey to the birthplace of his nightmare and confront another of the Black Circle of Seven: a powerful Necromancer with the ability to control monsters starving for blood bent on tearing Europe apart to find the macabre Book of the Old Blood. To do this, Zayne will need to delve into the darker realm of his history, agree to a deal with a dangerous Fae queen, and face the demons created by the one who founded the Witch Hunters—the mysterious Grand Master. Zayne and Logan’s budding relationship is put to the test…

Blaise Ramsay: Blaise started her journey in writing at the age of the fifteen with her first unfinished urban fantasy novel based on a popular video game series known as .Hack. From there she moved her journey into designing characters and doing concept art for various paying clients. In her older career, Blaise moved into working for the Indie Gaming industry where she did concept art for the company HollowRobot and their debut game, Johnny Reboot and various other clients. Sadly, the game didn’t go anywhere and Blaise found herself losing interest in what she had done for fifteen years. In 2017, Blaise embarked on her first ever NaNoWriMo challenge where she finished the Paranormal Shifter Romance, Blessing of Luna which she indie published. It has then produced a second installation into the Wolfgods series titled Bane of Tenebris. Both have recently been picked up by BlackRose Writing. Both of these books gave birth to the first of Blaise’s three businesses. The first, FyreSyde Publishing, a small press, has recently opened its doors to authors and works alongside them in the ever difficult challenge of book marketing. A running joke is Blaise considers herself an “odd duck” in the sense that she loves the marketing phase more than the writing phase of production. Her other two businesses include full-time freelance ghostwriting and the independent bookstore, GreenWood Grove Booksellers. After falling in love with the Dresden files by Jim Butcher and later Saints & Shadows by Christopher Golden, Blaise found a new love for Urban Fantasy. Reading the beloved Vampire Files by PN Elrod prompted Blaise to initiate her next phase and begin producing paranormal detective and noir novels. Now she combines the two and loves every minute of it. She currently lives in the hometown of Bonnie & Clyde with her husband, two adorable kids, two cats and a dog.