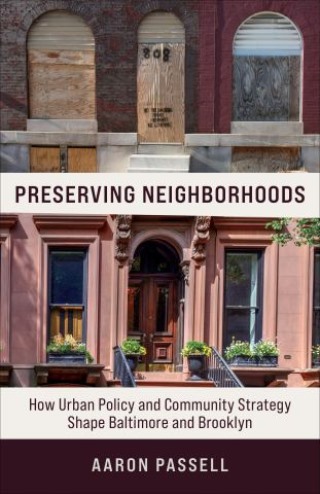 How Urban Policy and Community Strategy Shape Baltimore and Brooklyn

Historic preservation is typically regarded as an elitist practice. In this view, designating a neighborhood as historic is a project by and for affluent residents concerned with aesthetics, not affordability. It leads to gentrification and rising property values for wealthy homeowners, while displacement afflicts longer-term, lower-income residents of the neighborhood, often people of color.

Through rich case studies of Baltimore and Brooklyn, Aaron Passell complicates this story, exploring how community activists and local governments use historic preservation to accelerate or slow down neighborhood change. He argues that this form of regulation is one of the few remaining urban policy interventions that enable communities to exercise some control over the changing built environments of their neighborhoods. In Baltimore, it is part of a primarily top-down strategy for channeling investment into historic neighborhoods, many of them plagued by vacancy and abandonment. In central Brooklyn, neighborhood groups have discovered the utility of landmark district designation as they seek to mitigate rapid change with whatever legal tools they can. The contrast between Baltimore and Brooklyn reveals that the relationship between historic preservation and neighborhood change varies not only from city to city, but even from neighborhood to neighborhood. In speaking with local activists, Passell finds that historic district designation and enforcement efforts can be a part of neighborhood community building and bottom-up revitalization.

Aaron Passell: Aaron Passell is associate director of the Urban Studies Program at Barnard College, Columbia University. He is the author of Building the New Urbanism: Places, Professions, and Profits in the American Metropolitan Landscape (2013).