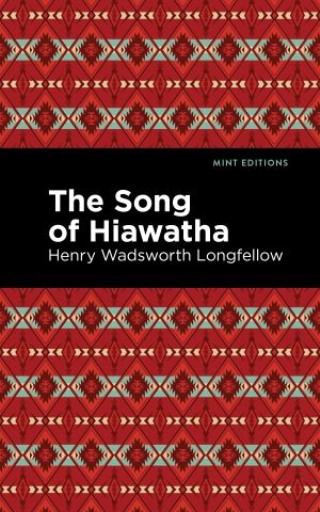 The Song Of Hiawatha

The Song of Hiawatha (1855) is an epic poem by Henry Wadsworth Longfellow. A master of poetic tradition and form, Longfellow wrote The Song of Hiawatha in trochaic tetrameter, the meter of such classical epics as the Finnish Kalevala. Inspired by stories from Ojibwe oral tradition, for which he consulted Ojibwe chief Kahge-ga-gah-bowh and other indigenous sources, Longfellow composed his American epic, a story of romance and perseverance steeped in legend and beloved by generations to come.

Along the shores of Lake Superior, an Ojibwe leader prophesies the arrival of Hiawatha, a great and noble hero. Before he can be born, however, Mudjekeewis must father the Four Winds by killing the Great Bear. His sons grow to be wild, fearless warriors, defending their land and feuding endlessly with one another. Although Nokomis, a woman who fell from the moon, warns her daughter not to fall for the West Wind, Wenonah is seduced by him, bringing about the birth of Hiawatha. Powerful and adventurous from a young age, Hiawatha grows into a legendary figure responsible for the discovery of corn and the invention of a written language for his people. When he meets the beautiful Minnehaha, a young Dakota woman, he struggles to balance his responsibilities as a leader and protector with a love that overwhelms him. The Song of Hiawatha is a romance of epic proportions that pays tribute to the stories of America’s first peoples.

With a beautifully designed cover and professionally typeset manuscript, this edition of Henry Wadsworth Longfellow’s The Song of Hiawatha is a classic of American literature reimagined for modern readers.

Henry Wadsworth Longfellow (1807-1882) was an American poet. Born in Portland, Maine, Longfellow excelled in reading and writing from a young age, becoming fluent in Latin as an adolescent and publishing his first poem at the age of thirteen. In 1822, Longfellow enrolled at Bowdoin College, where he formed a lifelong friendship with Nathaniel Hawthorne and published poems and stories in local magazines and newspapers. Graduating in 1825, Longfellow was offered a position at Bowdoin as a professor of modern languages before embarking on a journey throughout Europe. He returned home in 1829 to begin teaching and working as the college’s librarian. During this time, he began working as a translator of French, Italian, and Spanish textbooks, eventually publishing a translation of Jorge Manrique, a major Castilian poet of the fifteenth century. In 1836, after a period abroad and the death of his wife Mary, Longfellow accepted a professorship at Harvard, where he taught modern languages while writing the poems that would become Voices of the Night (1839), his debut collection. That same year, Longfellow published Hyperion: A Romance, a novel based partly on his travels and the loss of his wife. In 1843, following a prolonged courtship, Longfellow married Fanny Appleton, with whom he would have six children. That decade proved fortuitous for Longfellow’s life and career, which blossomed with the publication of Evangeline: A Tale of Acadie (1847), an epic poem that earned him a reputation as one of America’s leading writers and allowed him to develop the style that would flourish in The Song of Hiawatha (1855). But tragedy would find him once more. In 1861, an accident led to the death of Fanny and plunged Longfellow into a terrible depression. Although unable to write original poetry for several years after her passing, he began work on the first American translation of Dante’s Divine Comedy and increased his public support of abolitionism. Both steeped in tradition and immensely popular, Longfellow’s poetry continues to be read and revered around the world.