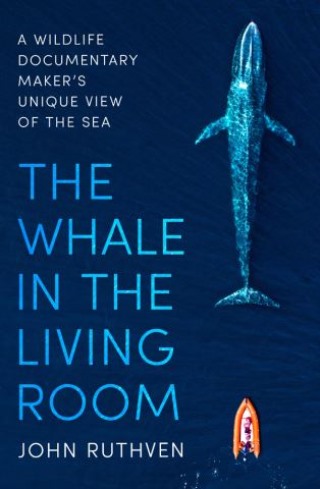 The Whale in the Living Room

A Wildlife Documentary Maker's Unique View of the Sea

The Whale in the Living Room follows the thrilling adventures of award-winning wildlife documentary producer, John Ruthven, on a journey of discovery - by turns memorable, touching and often funny -that has helped the undersea world flow into countless living rooms to reveal many of our ocean's mysteries.

John is the only producer to have worked on both Blue Planet and Blue Planet II, presented by David Attenborough, in total making nearly fifty ocean films, including episodes of Discovery Shark Week, expedition films for National Geographic and coral conservation documentaries for PBS. With innovative technology he has helped capture unique images of a sperm whale mother and calf, pictures of glowing creatures half a mile deep, and grey reef sharks hunting by the light of the moon.

We swim with him through blue lagoons, dive into the abyss to encounter new life forms, and experience everything from the danger of getting lost at sea to the sadness of finding a starving whale with a fishing net caught in its mouth. Through each remarkable adventure, John gives insight into what we currently know about the ocean, and our whole blue planet, revealing that the sea really is the 'saltwater country' the Yolngu people of Australia know it to be - a place with as many unique destinations in water as on land.

John's book also explores why we have remained largely blind to the pollution in our oceans until recently and charts how plastic 'went wild' in the sea, to understand how we might begin to clear up the mess.

JOHN RUTHVEN's passion is to engage people through film and all forms of electronic media, to tell great stories. Having completed a PhD in Zoology, he began his career as a professionally-trained BBC sound engineer. Over the years he has written, produced and directed audience-engaging and award-winning shows for BBC, Discovery, National Geographic, PBS and many other well-known broadcasters. In 2015 he received an Emmy for best environmental film in the USA, producing and directing Mysteries of the Coral Canyon for PBS, which explored the inter-connected life on the extraordinary underwater corals of French Polynesia, known as the 'rainforests of the sea'. He also produced the widely acclaimed Singapore Wild City, commissioned for the 50th anniversary of Singapore and narrated by Sir David Attenborough, a series that won Best Asian TV Documentary, 2016.

His most recent work is on Blue Planet II, for which he produced the episode on the open oceans, 'Big Blue', overcoming the difficult logistics of filming hundreds of miles offshore and keeping teams safe. Among the ground-breaking moments were the first ever images of mother and calf sperm whales diving into the abyss, using custom-made camera systems attached to the whales. This was a complex engineering project that he managed through an extensive technical knowledge of filming in the deep sea. In addition he wrote the script for David Attenborough on the main show, and the many other digital formats. His hope was that the team would take the viewer on an emotionally engaging journey through the world's seas and BBC-verified audience figures suggest they succeeded. The first transmission held an audience of 14 million in the UK, with nearly 50 per cent audience share, and the simulcast in China was watched by over 300 million. It is therefore among the most widely seen of all wildlife films.

Following a scene in which a pilot whale mother held a dead calf (which he wrote) the programme was mentioned by the Prime Minister and the Secretary of State for the Environment in parliament the next day, for engaging people with the issue of plastic pollution. The series won the 2018 Impact award for television after a public vote in the UK. From producing iconic images across the original Emmy Award-winning first Blue Planet series to directing actors inside a Second World War U-boat or following venomous snakes throughout Asia, John has a broad genre experience, including blue- chip natural history, drama, presenter led science shows and the web. He has written commissioned story outlines and scripts for the producer of Lord of the Rings, Barry Osborne, background stories to a prestigious international exhibition at the London Natural History Museum, and made several series of short films for various clients including conservation films for the UAE Expo 2012 silver-medal winning exhibit in South Korea.

He has recently given acclaimed talks on Blue Planet II, the latest to a 1,000-plus audience at the National Exhibition Centre in Birmingham. Other highlights in audience engagement include a live TV transmission into the Smithsonian Museum, Washington, from the deck of a ship in the Galapagos, during World Ocean Day, 2012, and co-leading 200 people on a month long tourist experience across Baffin Island, Canada, in August 2014.