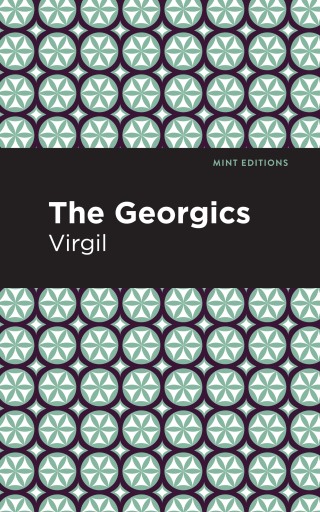 “In the whole of European literature there is no poet who can furnish the texts for a more significant variety of discourse than Virgil. [He] symbolizes so much in the history of Europe, and represents such central European values…” –T.S. Eliot

The Georgics (29 BC) is a poem by Roman poet Virgil. Although less prominent than The Aeneid, Virgil’s legendary epic of the Trojan hero Aeneas and his discovery of what would later become the city of Rome, The Georgics have endured as a landmark in the history of poetry. The Georgics were inspired by Lucretius’s De Rerum Natura and Hesiod’s Works and Days, an Ancient Greek poem describing the creation of the cosmos, the history of Earth, and the role of agriculture in human life. The Georgics is considered Virgil’s second major work of three and has inspired generations of poets and scholars interested in the ability of literature to bridge the artificial gap between humanity and the natural world.

“What makes the cornfield smile […] What pains for cattle-keeping, or what proof / Of patient trial serves for thrifty bees; / Such are my themes.” Beginning with these lines, Virgil’s Georgics is a poem about the life of the world and the need for order to ensure humanity’s survival. Surveying such diverse topics as the creation of the universe, the cycles of human history, and the technical processes applied to soil and animals to produce food and sustain life itself, this poem attempts to rekindle in its reader a sense of unity with the world. Written in a time of immense political upheaval following the death of Julius Caesar and the rise of Emperor Augustus, The Georgics is as much a poem of survival as of faith, a falling back on the old ways that sustain and nurture life, a way of preserving a volatile present for a future forever in the making.

With a beautifully designed cover and professionally typeset manuscript, this edition of Virgil’s The Georgics is a classic work of Roman literature reimagined for modern readers.

Virgil (70 BC-19 BC) was a Roman poet. He was born near Mantua in northern Italy. Educated in rhetoric, medicine, astronomy, and philosophy, Virgil moved to Rome where he was known as a particularly shy member of Catullus’ literary circle. Suffering from poor health for most of his life, Virgil began his career as a poet while studying Epicureanism in Naples. Around 38 BC, he published the Eclogues, a series of pastoral poems in the style of Hellenistic poet Theocritus. In 29 BC, Virgil published his next work, the Georgics, a long didactic poem on farming in the tradition of Hesiod’s Works and Days. In the last decade of his life, Virgil worked on his masterpiece the Aeneid, an epic poem commissioned by Emperor Augustus. Expanding upon the story of the Trojan War as explored in Homer’s Iliad and Odyssey, the Aeneid follows the hero Aeneas from the destruction of Troy to the discovery of the region that would later become Rome. Posthumously considered Rome’s national poet, Virgil’s reputation has grown through the centuries—in large part for his formative influence on Dante’s Divine Comedy—to secure his position as a foundational figure for all of Western literature.