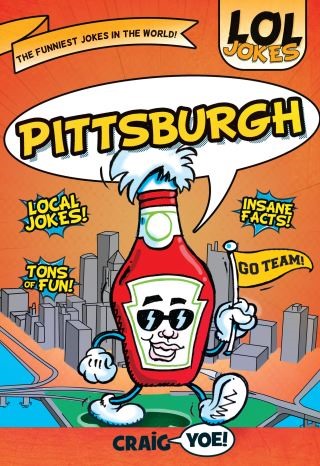 Bursting with laugh-out-loud jokes and fun facts, LOL Jokes: Pittsburgh combines the best of humor and history for young readers!

Inspired by all the wonderful sights, sounds, and . . . smells of the Steel City, this local joke book delivers kid-friendly punchlines that will have readers laughing 'til they cry! Alongside hilarious jokes and puns are fascinating facts, goofy tidbits of local history, and engaging graphics that will keep readers chuckling and sharing with friends. LOL Jokes: Pittsburgh is sure to deliver hours of knee-slapping entertainment.

What did the Pittsburgh Steeler say to the football?

Fun factoid: In 1892, the first professional football game was played in Pittsburgh between the Allegheny Athletic Association and the Pittsburgh Athletic Club. (Allegheny won!)

Craig Yoe: Craig Yoe has written TONS of kid joke books! Yoe has been a creative director for Nickelodeon, Disney, and for Jim Henson at the Muppets. Raised in the Midwest, he has lived from New York to California and has six kids!